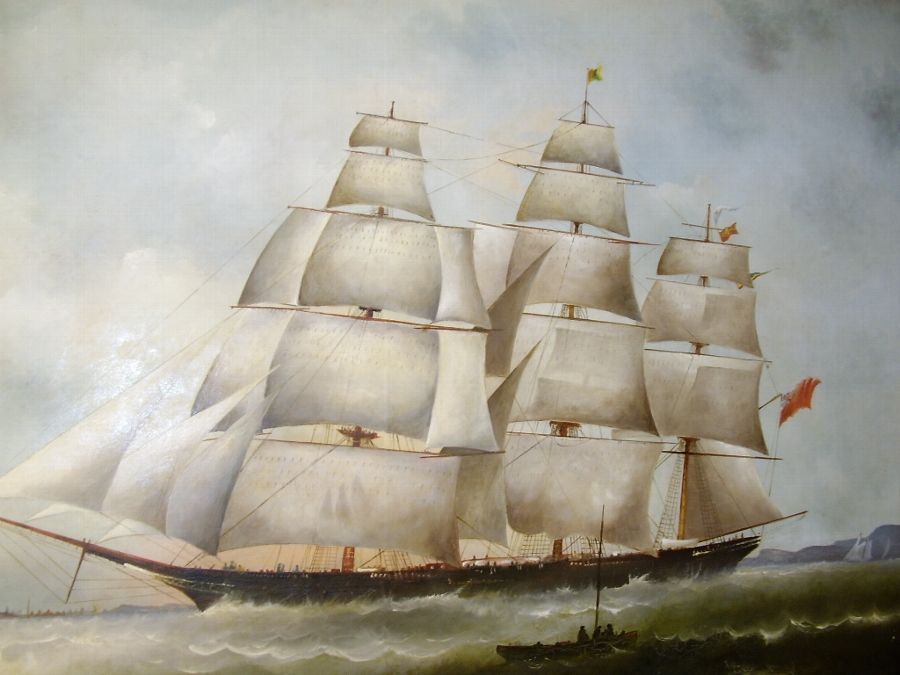 Hundreds of clippers were to be built in the early 19th century by the innovative Victorian engineers who designed and combined state of the art materials with a sleek hydro-dynamic hull shape that could slip through the water with least resistance.
Cutty Sark’s hull was of composite construction with rock elm planks below the water line and teak above, fixed to a wrought iron framework. This composite construction gave her narrow hull far more cargo space than would have been possible with an all-timber construction, and the rigidity to support three huge masts – the tallest 152 feet. The hull was sheaved in Muntz metal, a type of brass designed primarily as an anti-fouling measure, reducing the growth of weed and barnacles.

By the time it was launched in 1869, propeller-driven steam-powered shipping was already competing with sailing craft for the global trade routes. HISTORY
The term ‘clipper’, which simply means a fast ship, had previously been associated with the schooners and brigs used by the Americans to beat the British naval blockade during the War of 1812. The term was adopted to describe the fast, three-masted, narrow-hulled ships of American merchants which emerged in the 1830s and were quickly adopted by the British too. With masts as tall as a 20-storey building, each bearing a number of huge, square sails and with triangular stay sails between, clippers had the ability to carry their cargo much faster than any previous sailing ship. With good winds they could cover 250 miles a day.CUTTY SARK Was commissioned by the magnate Jock Willis in the 1860s and designed by Hercules Linton of ship builders Scott and Linton at Dumbarton, Scotland. However, the firm had never built anything of this size before and went bankrupt before the hull was finished. Construction had to be completed by neighbouring shipbuilders William Denny & Brothers. On 22nd November 1869, the ship was launched at Dumbarton, towed to Greenock for closing work on her mast and rigging, and then sailed to London where she was packed and loaded for Shanghai with barrels of alcohol. Cutty Sark set sail on the 16th of February 1870 on the first of eight voyages to carry tea from China. Cutty Sark never lived up to her commissioner’s hopes of winning the race to bring tea back to England, but in 1883 the ship started transporting wool from Australia, and it was here that she found her forte. Her first trip from Gravesend to Newcastle NSW was completed in just 83 days. This was 25 days faster than other vessels on that route at that time. Then, in 1885 the ship, loaded with wool, made a name for herself by covering the distance from England to Sydney in 77 days, and her return voyage took just 73 days. This was the start of a ten-year reign in which every merchant would know her name.
By 1895 steamships were taking over every route and Cutty Sark’s owner, who was now making little profit out of her, sold the vessel to a Portuguese firm. In 1916, a year after Portugal declared war on Germany, the ship, which was now named The Ferreira, was badly damaged in heavy seas. With her masts broken, she was hauled into table bay, South Africa and re-rigged as a barquentine due to the high war-time price of masts. In this arrangement only her foremast was square-rigged while the other two were rigged fore-and-aft. In 1922 the ship was spotted by an Englishman named Wilfred Dowman while again being repaired, and a year later he purchased the vessel and bought her back to Britain to restore & she returned to her original nameARTIST
DAVID HEWITT B.1878-D.1939.Signed lower right corner.CONDITION
Good Condition after light clean in the past and with two minute areas of fine cracquelure. FRAME
Later replacement wooden gilt frame with small repairMEASUREMENTS (Including Frame)
Height: 35 Inches
Width: 51 InchesDELIVERY UK & WORLDWIDE/REQUEST A QUOTETELEPHONE 07765 856171 7 DAYS A WEEK (10AM-10PM)OUR REF 0526