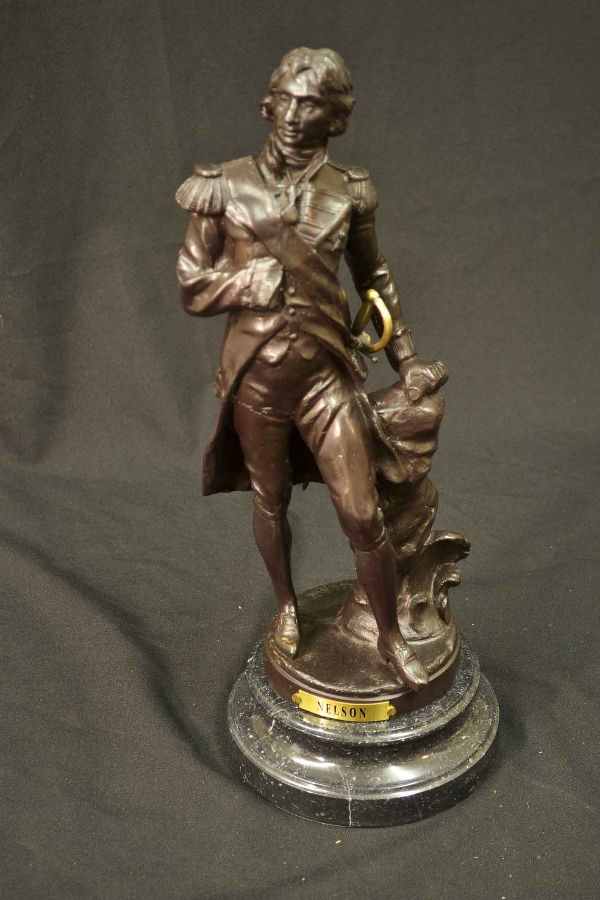 Still not found something similar? Why not save a search and get a notification in your inbox when an matching antique is added to our ever-growing database?
Save a search

A stunning bronze sculpture of an of the famous British Admiral Lord Nelson.This high quality bronze is made from the lost wax process (cire perdue).The attention to detail is absolutely fantastic and the sculpture, set on an attractive marble base, is extremely lifelike.Measurements:Height 44 cm&#8232;&#8232; x Width 20 cm&#8232;&#8232; x Depth 18 cm&#8232;&#8232;Approx. weight 5.9 kg Horatio Nelson, 1st Viscount Nelson, 1st Duke of Bront?, KB (29 September 1758?21 October 1805) was an English flag officer famous for his service in the Royal Navy, particularly during the Napoleonic Wars. He was noted for his inspirational leadership and having a superb grasp of strategy and unconventional tactics, which resulted in a number of decisive naval victories. He was wounded several times in combat, losing one arm and the sight in one eye. Of his several victories, the most well known and notable was the Battle of Trafalgar in 1805, at the end of which he was shot and killed.Nelson was born into a moderately prosperous Norfolk family and joined the navy through the influence of his uncle, Maurice Suckling. He rose rapidly through the ranks and served with leading naval commanders of the period before obtaining his own command in 1778. He developed a reputation in the service through his personal valour and firm grasp of tactics but suffered periods of illness and unemployment after the end of the American War of Independence. The outbreak of the French Revolutionary Wars allowed Nelson to return to service, where he was particularly active in the Mediterranean. He fought in several minor engagements off Toulon and was important in the capture of Corsica and subsequent diplomatic duties with the Italian states. In 1797, he distinguished himself while in command of HMS Captain at the Battle of Cape St Vincent.Shortly after the battle, Nelson took part in the Battle of Santa Cruz de Tenerife, where his attack was defeated and he was badly wounded, losing his right arm, and was forced to return to England to recuperate. The following year, he won a decisive victory over the French at the Battle of the Nile and remained in the Mediterranean to support the Kingdom of Naples against a French invasion. In 1801, he was dispatched to the Baltic and won another victory, this time over the Danes at the Battle of Copenhagen. He subsequently commanded the blockade of the French and Spanish fleets at Toulon and, after their escape, chased them to the West Indies and back but failed to bring them to battle. After a brief return to England, he took over the C?diz blockade in 1805. On 21 October 1805, the Franco-Spanish fleet came out of port, and Nelson''s fleet engaged them at the Battle of Trafalgar. The battle was Britain''s greatest naval victory, but during the action Nelson was fatally wounded by a French sniper. His body was brought back to England where he was accorded a state funeral.Nelson''s death at Trafalgar secured his position as one of Britain''s most heroic figures; numerous monuments, including Nelson''s Column in Trafalgar Square, London, have been created in his memory and his legacy remains highly influential.&#8232;&#8232;Sometimes called by the French name of ''cire perdue'' or the Latin, ''cera perduta'' is the process by which a bronze or brass is cast from an artist''s sculpture.&#8232;&#8232;In industrial uses, the modern process is called investment casting. An ancient practice, the process today varies from foundry to foundry, but the steps which are usually used in casting small bronze sculptures in a modern bronze foundry are generally quite standardised.&#8232;

Regent Antiques has 1102 antiques for sale.
click here to see them all