portrait of herbert jones 1881-1951, royal jockey, in his racing silks 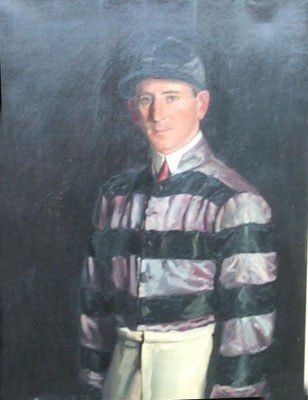 Herbert Jones (1881-1951) was a leading Thoroughbred horse racing jockey, who often rode for King Edward VII. He won the British Triple Crown in 1900, the 1905 Epsom Oaks, another Derby in 1909 and the 2000 Guineas three more times. In 1913 he rode Anmer King George V''s horse in the Derby and was involved in a collision with Emily Davison, the suffragette, who was killed.
From the royal box, the bearded King George V ranged his binoculars over a scene of color, bustle and noise: vociferous bookmakers shouting the odds, costers in pearly jackets crying their wares, buskers grinding hurdy-gurdies, gypsies and tipsters offering glimpses of the future. From high in the stands, the view was of one great bobbing sea of silk toppers, straw boaters, cloth caps and fancy creations of velvet and lace adorned with flowers and plumage.
It was Derby Day, June 4, 1913, and in this third year of George''s reign a record crowd had converged on Epsom Downs to see the race that was the blue riband of the English turf, the premier classic for 3-year-olds. Spectators came on foot, bicycles and donkey carts, by automobile, train and a newfangled transport called the motor omnibus; they filled the stands and packed the rails along the horseshoe-shaped racecourse of 1? miles. Singly or in groups, they came together as strangers, and in the evening, still strangers, they would disperse and go their separate ways. Well, not quite all. On this particular afternoon, two totally disparate people?a man and a woman?traveled individually to Epsom Downs, each unaware of the other''s, existence and yet destined to meet in circumstances that would have dramatic consequences for both. Together, they would make this Derby the most sensational and disastrous ever run.
The woman was an altogether improbable racegoer: Emily Wilding Davison, a tall, thin, red-haired spinster, plainly dressed in light overcoat with matching gray hat. Her interests were essentially intellectual, befitting a self-made blue-stocking who had emerged from London University with a first-class honors degree in English. Horse racing meant precisely nothing to her, yet, on this day, she bought a railway ticket from London to Epsom, and on arrival she positioned herself at the rails near the sharp bend in the track called Tattenham Corner.The man was familiar to all regular racegoers: Herbert (Bert) Jones, 32 years old, a quiet, unassuming fellow. Despite his rough, country stock and minimal education, he journeyed to Epsom in style, by chauffeur-driven limousine. On arrival he changed into the royal racing colors of purple, gold braid, scarlet sleeves and black velvet cap with gold tassel. As the King''s jockey, he was to ride the gray colt Anmer, a 50-to-1 long shot.
Although divergent in outlook, interests and tastes, Emily and Bert did share one distinctive characteristic: a kind of stubborn courage. It had taken Emily far from the remote Northumberland town of Morpeth, where her widowed mother kept a tiny sweetshop, and it had enabled her, in open defiance of firm-rooted prejudice against career women, to work her way through college and win recognition as a brilliant scholar and gifted orator. The same kind of courage had enabled Bert to advance almost overnight from humble stableboy to celebrated jockey, largely on the strength of his handling of Diamond Jubilee, the most vicious and wayward horse in the royal stables, which he rode to victory in the Two Thousand Guineas, the Derby and the St. Leger in 1900. Single-handed, he made Prince Eddy, the future King Edward VII, winning owner of the year. Other classic triumphs had followed, including a second Derby win, on King Edward''s Minoru in 1909.
Now, in 1913, Jones was riding for a second monarch and seeking his third Derby success. But he didn''t rate his chances very high on Anmer. His private fancy for the race was the 6-to-4 favorite, Craganour, a spirited bay colt owned by Mr. C. Bower Ismay, the shipping magnate.Far away from the stands, just beyond Tattenham Corner, Emily Davison looked at her watch. It was almost time for the Derby. She had watched the previous races idly, ticking off three winners on her scorecard, but her interest remained purely academic. She did not even have a bet on the Derby. She had matters of far greater moment on her mind.
Meanwhile, 15 runners were milling at the start. Bert Jones, all coolness and experience, sat patiently on a blinkered mount. Craganour, fierce of eye and kicking out to left and right, was the cause of some delay. Then, suddenly, they were off. Under leaden skies and on firm going, the field descended briefly, then faced a testing climb before veering left at five furlongs out and descending to the final sharp lefthander at Tattenham Corner.At the mile post, with two-thirds of the race run, the leader was Mr. Alan Cunliffe''s Aboyeur, a 100-to-1 shot. It meant nothing. As the crowd knew, the classic tactic in this supreme test of speed and stamina is to take the lead around Tattenham Corner as the horses enter the long final straight. And Craganour''s rider, American Jockey Johnny Reiff, needed no reminder; he was already a double Derby winner and the younger brother of onetime Derby victor Lester Reiff.
Jones retired from riding in 1923. Son of the jumping trainer Jack Jones, young Herbert was apprenticed to Richard Marsh at the age of ten and rode his first winner in 1896. He was the work rider for the temperamental Diamond Jubilee and it was noted that this wayward colt went better for him than for any more established jockey. Hence the young man got his chance and won the Triple Crown on the Prince of Wales''s horse.
When the royal jockey John Watts retired, Herbert Jones took his place, and won the Derby on Minoru for Edward VII. He retired in 1923. Richard Marsh wrote, ''A better servant no man ever had, and a straighter or more honest jockey never got on a horse''.