portrait of dancing brave 1983-1999 and guy harwood the trainer 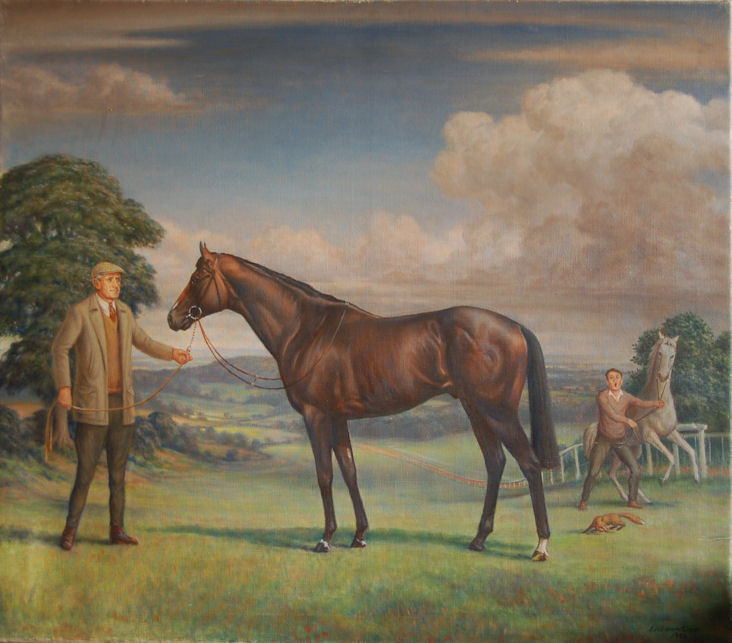 Dancing Brave (1983?1999) was a thoroughbred racehorse, foaled in 1983, a bay colt sired by Lyphard out of Navajo Princess. He was purchased as a yearling by Khalid Abdullah for US$200,000 in Kentucky.
Trained in England by Guy Harwood, after winning twice as a two-year-old, Dancing Brave opened his three-year-old campaign in 1986 with a victory in the Craven Stakes - a ''Guineas Trial'' at Newmarket, and followed it up by winning the 2,000 Guineas itself, beating Green Desert by three lengths.
Next on the agenda was the Epsom Derby, although there were concerns about whether he would see out the further distance of 1 mile 4 furlongs (2414 m). Close to last place entering the home straight, Dancing Brave made up a lot of ground, but Shahrastani beat him by half a length.
His jockey, Greville Starkey, was criticised for his tactics, but kept the ride for Dancing Brave''s next race, a win in the Eclipse Stakes at Sandown Park.[citation needed] However, when Starkey was unable to ride the horse in the King George VI and Queen Elizabeth Stakes he was replaced by Pat Eddery who became the preferred choice by the time of the Prix de l''Arc de Triomphe. Both of these races were also won.
The 1986 ''Arc'' was one of Dancing Brave''s best performances, with a devastating late run winning by a length and a half in record time against a high class field, including his Derby conqueror Shahrastani who finished in fourth place.
Dancing Brave''s racing career ended on a disappointing note in the United States, finishing fourth behind Manila in the Breeders'' Cup Turf at Santa Anita Park.
After being retired to stud at Dalham Hall Stud, Newmarket, he sired numerous winners, having a particularly good crop of three-year-olds in 1993, including Commander in Chief, who won the Epsom Derby, and White Muzzle, second in both the King George VI and Queen Elizabeth Stakes and the Prix de l''Arc de Triomphe. After five seasons standing at stud in Britain, Dancing Brave was sold to the Japan Racing Association and brought to the Shizunai Stallion Station at Hokkaid&#333;. He died on August 2, 1999 of a heart attack.

Guy Harwood (born June 10, 1939 in Pulborough, West Sussex, England) is a retired British racehorse trainer. Harwood was born in Pulborough, West Sussex, in 1939. Harwood began riding at the age of 18 and won 40 point-to-point races and 14 National Hunt races over the next few years. He began training horses in 1965 under permit, and took out a training license in 1966, establishing the Coombelands racing stables. He trained many winners there, including Dancing Brave, winner of the 1986 Prix de l''Arc de Triomphe and European Horse of the Year for 1986. In 1996 his daughter, Amanda Perrett, took over the reins at Coombelands. Harwood received the prestigious Goodwood Racecourse Media Dinner Award for 2007.He was born on June 10, 1939, locally to Goodwood at Pulborough, West Sussex, where his father, Wally Harwood, had established a petro-chemical manufacturing business and the car dealership Harwoods eight years earlier.
Harwood, who was educated at Stowe, signed a three-year engineering apprenticeship with a firm in Dartford upon leaving school, with the intention of joining the family business, but he developed a love of racing during that time when staying with the famous Winter family at Southfleet.He began riding out at for Ryan Price at Findon and, aged of 18, opted for a life with horses, riding 40 point-to-point winners along with14 under National Hunt Rules over the next few years. He started working as pupil assistant trainer to Bryan Marshall when he was 21 and, five years later in 1965, he commenced training under permit. That year also saw the sale of the family engineering business, as well as his marriage to Gill Lawson.Harwood first took out a full licence to train in 1966 after initially training jumpers for a year under permit. He proceeded to establish Coombelands stables at Pulburough as a state of the art training complex and succeeded in attracting some of the finest horses and biggest owners in the world.
Acrania won the Jockey Club Stakes in 1967 and six years later the trainer announced his arrival at racing''s top table when Jan Ekels landed the Queen Elizabeth II Stakes at Ascot, a race he would go on to win thrice more with To-Agori-Mou (1981), Sackford (1983) and Warning (1988).
His association with Goodwood racecourse, which is but a short hack across the downs from Pulborough, is well established, and his big-race victories at his local course include two wins in the track''s showpiece contest, the Group One Sussex Stakes.
Harwood''s first success in the great race came in 1985 with Rousillon, winner of the Queen Anne Stakes and Prix du Moulin that same season, who swept to the lead inside the final furlong under Greville Starkey to record a two and a half length verdict over Bairn.
The second of Harwod''s Sussex Stakes triumphs was with the brilliant Warning in 1988, who had landed the Richmond Stakes at Goodwood the previous year. The Khalid Abdulla-owned three-year-old, ridden by Pat Eddery, went clear of Then Again by a length and a half victory in the mile championship event.
He also enjoyed back-to-back triumphs in the Group Two Goodwood Cup with Sadeem (1988) and Mazzacano (1989), had two successes in the Nassau Stakes with Go Leasing (1981) and Mamaluna (1989), won the Richmond Stakes twice with Young Generation (1978) and Warning (1987) as well as gaining two victories in the Vintage Stakes thanks to Treboro (1981) and Undercut (1987)Overall Guy Harwood trained 116 winners at Goodwood, including at least two trebles on a day?s racing here and enjoyed more 32 winners during Glorious Goodwood.
His initial Classic triumph came in 1981 when Recitation captured the Poule d''Essai des Poulains and a week later To-Agori-Mou captured the 2,000 Guineas at Newmarket to give him the first of his two English Classic wins. The second came in 1986 when the great Dancing Brave took the same Newmarket Classic in scintillating fashion.
Dancing Brave was the best horse to grace Coombelands and Harwood did a masterful job in priming his exceptional charge for a string of top-level triumphs that included the Eclipse Stakes, King George VI & Queen Elizabeth Diamond Stakes and the Prix de l''Arc de Triomphe but sadly not the Derby in which he finished fast to take second.The French performance earned him the accolade of Europe''s Horse of the Year in 1986, and a highest-ever rating of 141 in the International ClassificationsOther stars to have benefited from Harwood''s expertise include Kalaglow, winner of the King George VI & Queen Elizabeth Diamond Stakes and Eclipse Stakes, dual Ascot Gold Cup winner Sadeem, Lockinge Stakes and Prix Jean-Prat victor Young Generation, Allez Milord, Prix Jacques le Marois and Champagne Stakes winner Lear Fan, Cacoethes, Ela-Mana-Mou, Polish Patriot and Brocade.As well as horses, there were a stream of talented people who started off with the trainer or were connected with the yard such as jockeys Greville Starkey, Ray Cochrane, Tony Clark, Chris Kinane, Wendyll Woods, Nigel Hawke, bloodstock agent James Delahooke and trainers to be like Guillaume Macaire and Steve Hall, His brother-in-law and assistant Geoff Lawson was one of many who helped contribute to the success of the yard as did loyal staff like Tommy Townsend and Martyn Windsor.Harwood handed over the reins at Coombelands in 1996 to his daughter Amanda Perrett in order to focus his efforts on the family business, of which he is chairman and indulge in hobbies like bridge.