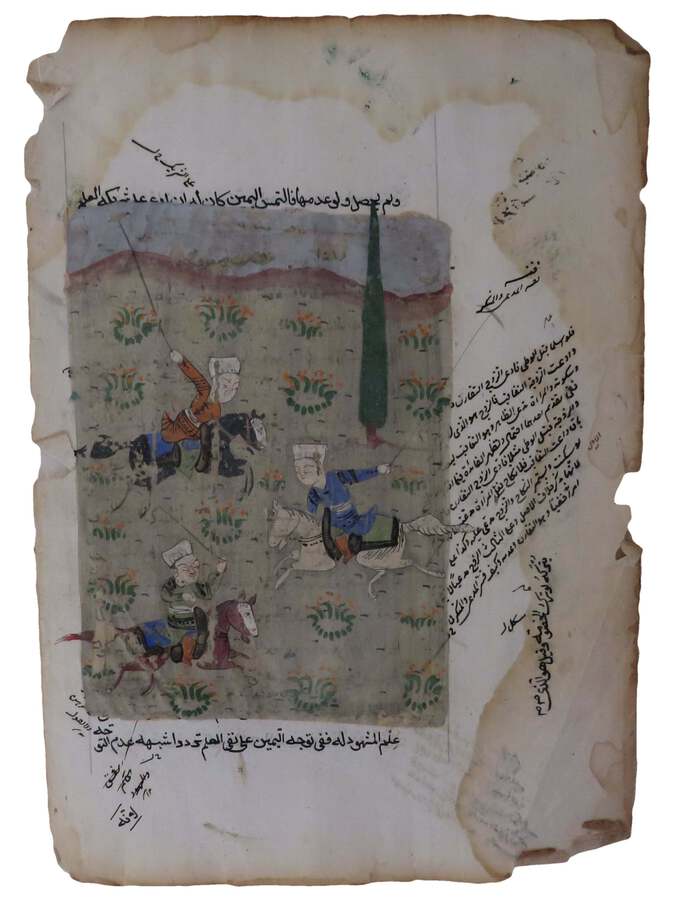 A miniature illuminated manuscript page depicting a hand-painted scene of a game of polo at court in the Mughal Empire on handmade paper - with calligraphic script bordering the scenes, in the margins, and on the verso. The Mughals, Islamic dynasty rulers of northern India between 1526 and 1857, were known for their great patronage of the arts. Artists created intricate paintings and illuminated manuscripts depicting scenes of daily life, adventurous tales, mythological, royalty, and recreational scenes like this one. The text of "Karmamak-i-Ardishi-i-Papakanone" includes one of the earliest references to polo in Persia (Iran) where it was known as chaugan (meaning mallet). Interestingly, Persian art - although under the influence of Islam - never completely forbade the inclusion of the human figure. Furthermore, the depiction of figures - oftentimes in groups - is a common practice in the miniature tradition. Scholars believe that this was because the miniature was used as a private form of visual culture. These images were kept in a book or an album and only shown to a select audience. For this reason, artists could be more free when creating miniatures than when creating wall paintings which were viewed by a wider audience. Mughal painting refers to a type of miniature painting - either serving as book illustrations or created as single work. The term miniature suggests a tiny scale; however, it actually indicates a style of watercolor work similar to early European book illustrations that used the red pigment minia. Some Indian miniatures are in fact quite large. The Mughal style stems from Persian miniature painting, though with Indian Hindu, Jain, and Buddhist influences, evolving largely throughout the Mughal Empire (16th to 19th centuries), and eventually spreading to other Indian courts - Muslim, Hindu, and Sikh The tradition continues today with Mughal-style miniature paintings still being created, though only by a relatively small number of artists in Rajasthan.If there is interest, I will provide other details/information available prior to purchase.