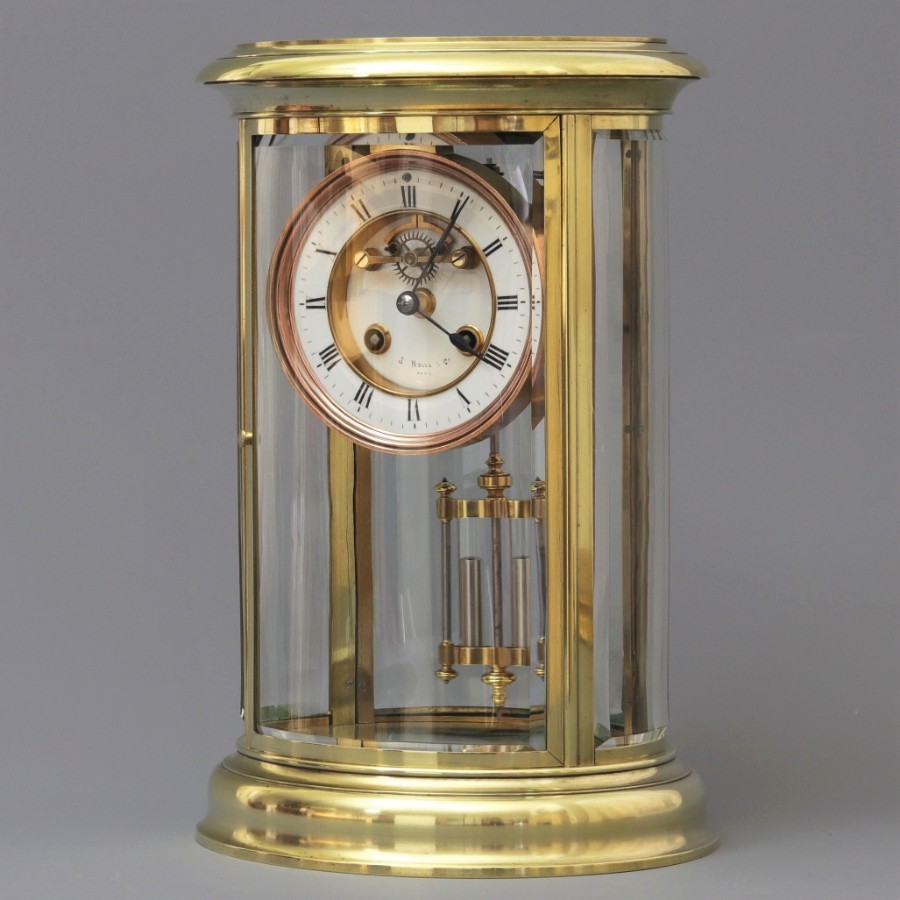 Elegantly proportioned French Oval Four Glass striking mantle clock with visible escapement (of type often referred to as a Crystal Regulator), by Samuel Marti et Cie c1875. The clock is in an oval brass case with plinth and cornice mouldings. Curved bevelled glass panels. It has a stepped, white enamelled dial with black roman numerals and blued steel hands. Brass winding bezels and exposed ruby pin palleted deadbeat Brocot escapement enabling fine regulation. The dial's bezel is in original rose-gold finish – the clock's underside carrying the Paris gilder's mark. An 8-day movement striking the hours and half hour on a bell. Twin-flask faux-mercury pendulum (indistinguishable from mercury vials as well as enabling shipping/import where mercury is prohibited). Backplate stamped with ‘Medaille De Bronze’ for movement maker S. Marti et Cie (awarded 1860) and serial number 11122. Also stamped HP & Co (most likely to have been the case-maker) and serial number 2614. Available with gilded gesso base – handwritten serial number (2614) on its underside suggesting that it was originally made to accompany the clock. Supplied with keys. The clock measures 30 cm in height (excluding base), 20 cm width and 16.5 cm depth. Excellent timekeeper. Watch a short video of it striking (above). Fully cleaned and serviced but retaining its antique brass patina. The clock's movement is covered by our 12-month warranty in the UK.
This clock is in exceptional condition commensurate with age. Bevelled glass panel and stepped dial are in pristine condition. The brass case has a beautifully aged surface patina and is without damage. In excellent working condition. Please see images as these form an important part of the description.

Samuel Marti (born 1811 Langenthal, Bern) moved to Montbéliard, France in 1830. Along with two business partners, he founded S. Marti & Cie in 1832 – becoming sole owner in 1841. From 1863 Marti & Cie worked closely with Japy Freres & Cie and A Roux & Cie (Vincenti & Cie), setting up a business based in Paris to market their clock movements. Initially based at Le Pays de Montbeliard – from 1870 they are known to be based at Rue Vieille-du-Temple, Paris. The company won medals at various Paris exhibitions (1860 Bronze: 1889 Silver: 1900 Gold: 1931 Grand Prix). Collaboration between the companies continued with members of the Japy family directing the company following Samuel Marti’s death in 1869. Samuel Augustus Marti (born 1857) took over the management of the company around 1890. The Japy and Marti families remained close – with Samuel Augustus’ son, André Samuel Jules Marti (1890-1958) marrying Jenny Alice Japy, a descendant of Auguste Julien Japy.
James Neill (of J Neill & Co) and his elder brother (John Ross) joined his father’s (Robert Neill)  business of silversmiths and jewellers, initially established in Belfast in 1803. The partnership of Neill & Sons was dissolved in 1849 on Robert’s retirement with James and John Ross continuing trading from the same addresses under a new partnership – John R and James Neill. In 1863 the brothers abruptly ended their partnership with both setting up businesses in separate premises. John Ross however closed his business in 1881 whilst James’ business (J Neill & Co) developed into a successful firm of jewellers, watchmakers and opticians – manufacturing several public clocks in the north of Ireland. James retired in 1884, handing over the business to his son Sharman. Sadly, Sharman lost both his sons in WWI and no further records are found. The present Belfast jewellers, Sharman D Neill Ltd, have no connection with the family.