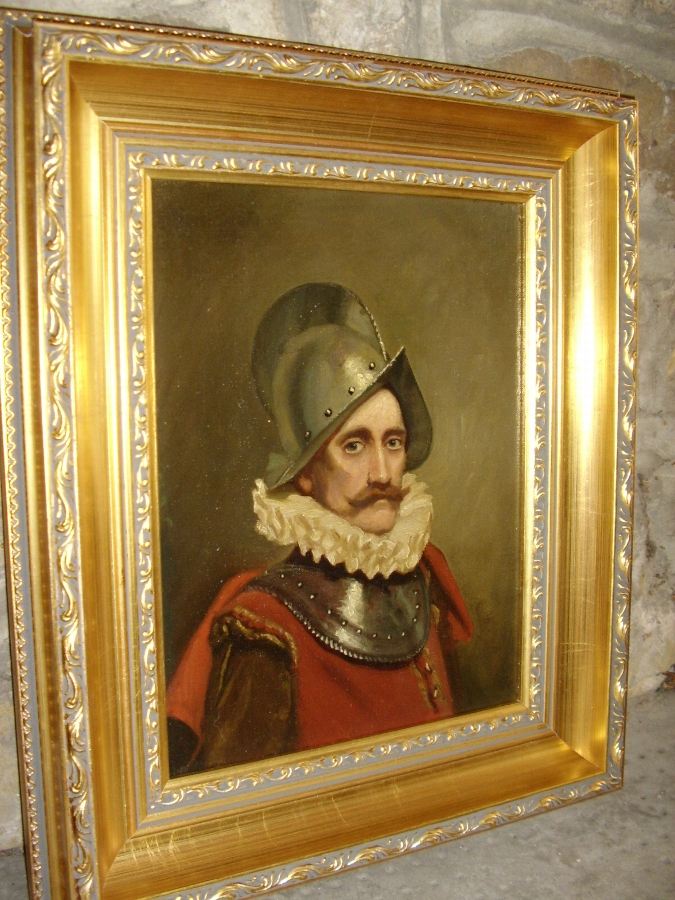 DESCRIPTION
We are offering for sale this very well executed oil on canvas portrait of a SWISS GUARD , which is unsigned, but entitled verso on the edge of the canvas.

HISTORY OF THE SWISS GUARD
Swiss Guards are the Swiss soldiers who have served as bodyguards, ceremonial guards, and palace guards at foreign European courts since the late 15th century.
Apart from household and guard units, regular Swiss mercenary regiments have served as line troops in various armies; notably those of France, Spain and Naples up to the 19th century (see Swiss Mercenaries).
In contemporary usage, the name Swiss Guard generally refers to the Pontifical Swiss Guard of Holy See.Various units of Swiss Guards existed for hundreds of years. The earliest such unit was the Swiss Hundred Guard (Cent Suisses) at the French court (1497 – 1830).
This small force was complemented in 1567 by a Swiss Guards regiment. The Papal Swiss Guard (now located in Vatican City), was founded in 1506 and is the only extant Swiss Guard.
In the 18th and early 19th centuries several other Swiss Guards existed for periods in various European courts.The use of Swiss soldiers as Royal guards and as the Pontifical guard stems from the reputation of Swiss mercenaries at the time of their formation.
Since Switzerland was a poor country, young men often sought their fortunes abroad.
Having a reputation for discipline and loyalty, and employing revolutionary battle tactics, they were considered the most powerful troops of the 15th century, until their methods were refined by the Landsknechte in the early 16th century.TITLE OF PAINTING
'A Soldier of the 16th Century'. The painting is a head and shoulders portrait of a lean faced, moustachioed solder, wearing a comb morion helmet and a metal gorget over his red doublet, cream ruff and a red cloak.As the painting is unsigned, we can offer no biographical information about the artist, save to say that the painting has been executed in a masterly fashion.FRAME
The painting has been newly framed in a 2 7/8" gilt frame which suits it very well. It is ready to hang.MEDIUN
Oil on canvas.MEASUREMETS
Image size 11 1/2" x 8 3/4" (29.2cm x 22.2cm)FRAME SIZE 17.25" x 14.5" (44.1cm x 36.8cm)CONDTION
Very good. There are no repairs to the canvas, which is clean and taut. There is no craquelure or stretcher marks. The frame is a recent replacement.TELEPHONE ENQUIRIES 07765 856171
HOURS 10 AM - 10 PM 7 DAYS A WEEKDELIVERY UK MAINLAND & WORLDWIDE
QUOTES AVAILABLE ON REQUESTOUR REF: 0479 * VERY WELL PAINTED