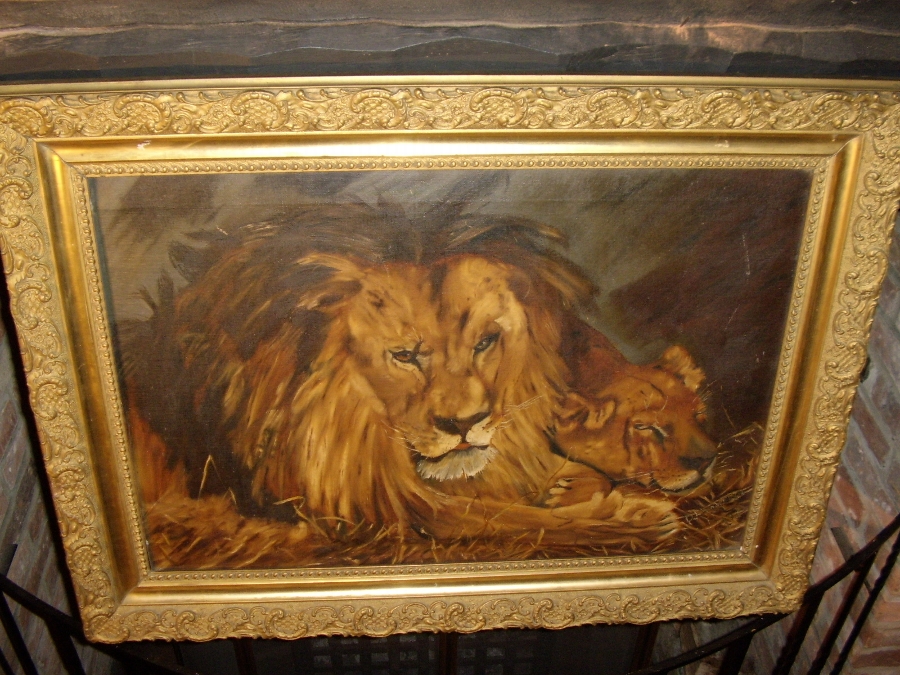 Good quality oil on canvas study of a large maned male lion resting alongside his female lioness
companion,depicted in a bramble and straw landscape.
Realistically painted animals by a competant hand,being full of charactor and warmth.

ABOUT THE SPECIES
The lion (Panthera leo) is one of the four big cats in the genus Panthera and a member of the family Felidae. With some males exceeding 250 kg (550 lb) in weight,[4] it is the second-largest living cat after the tiger. Wild lions currently exist in sub-Saharan Africa and in Asia (where an endangered remnant population resides in Gir Forest National Park in India) while other types of lions have disappeared from North Africa and Southwest Asia in historic times. Until the late Pleistocene, about 10,000 years ago, the lion was the most widespread large land mammal after humans.Lions live for 10–14 years in the wild, while in captivity they can live longer than 20 years. In the wild, males seldom live longer than 10 years, as injuries sustained from continual fighting with rival males greatly reduce their longevity.[6] They typically inhabit savanna and grassland, although they may take to bush and forest. Lions are unusually social compared to other cats. A pride of lions consists of related females and offspring and a small number of adult males. Groups of female lions typically hunt together, preying mostly on large ungulates. Lions are apex and keystone predators, although they scavenge as opportunity allows. While lions do not typically hunt humans, some have been known to do so. Sleeping mainly during the day, lions are primarily nocturnal, although bordering on crepuscular[7][8] in nature.Highly distinctive, the male lion is easily recognised by its mane, and its face is one of the most widely recognised animal symbols in human culture. Depictions have existed from the Upper Paleolithic period, with carvings and paintings from the Lascaux and Chauvet Caves, through virtually all ancient and medieval cultures where they once occurred. It has been extensively depicted in sculptures, in paintings, on national flags, and in contemporary films and literature. Lions have been kept in menageries since the time of the Roman Empire, and have been a key species sought for exhibition in zoos over the world since the late 18th century. Zoos are cooperating worldwide in breeding programs for the endangered Asiatic subspecies.CONDITION
Very good condition commensurate with age.ARTIST
Signed Lower Bottom Right Corner.
D.Llewelyn (David Llewelyn.DATE.
The date is written on the stretcher 29/6/05FRAME
Original Early Victorian very decorative plaster and gilt finish,all in good order.MEASUREMENTS
Height 26 Inches
Width 35 Inches
Depth 2 InchesTELEPHONE ENQUIRIES 07765 856171
HOURS 10AM -10 PM 7 DAYS A WEEKDELIVERY UK MAINLAND & WORLDWIDE
QUOTES AVAILABLE ON REQUESTOUR REF 0478 * Nice realistic example