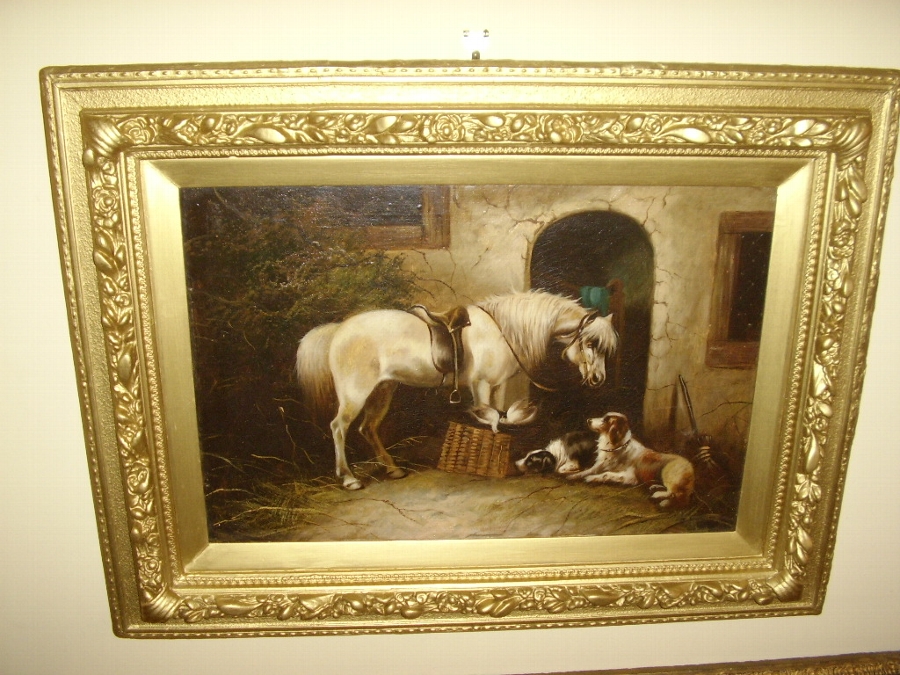 An excellent oil painting of a grey gilding with dogs
set inside the original frame and offered for sale as found.By repute,this example is attributed to the artist George Armfield Jnr.

ABOUT THE ARTIST
George Armfield Smith (the name he was known until the year 1840) was born in Wales (actually Bristol: according to Armfield family information). His father, the portrait painter William Armfield Hobday (1771-1831), had a studio at 54, Pall Mall, London, and from his father, George Armfield obtained any artistic education he may have received.The earliest records show that George Armfield was living at 16, Lamb’s Conduit Street during the mid to late 1830’s and he exhibited his first painting, Lion, a Newfoundland dog, the property of R. Barnes, Esq., at the Royal Academy (R.A.) in 1836 under his family name Smith.He first exhibited at the British Institution in 1839 when he showed two pictures, the Study of a Dog's Head and Terrier chasing a RabbitIn 1840 he moved to Elm Cottage, Hayling, Hampstead - living there for just one year. During the next 20 years he moved quite often, living in Hoxton, Clapham, Camberwell, Larkhall Rise and Wandsworth.From 1836 -1862 he exhibited 37 works at the R.A. and it appears that he exhibited his first work, A Practical Lesson, at the Royal Society of British Artists (R.B.A.) in 1850. He continued to exhibit at the R.B.A. until 1875; displaying some 42 works. In all, he exhibited over 100 paintings at the major London exhibition halls during his lifetime.The painter died at Clapham in August 1893, and was buried at Norwood.Works by Armfield can be found in many private and public collections includ­ing the Walker Art Gallery and the Glasgow Art Gallery. CONDITION
Canvas and painted surfaces are in lovely condition and requires no work.Has been cleaned in past years.FRAME
Has had good repairs to the very back edged of the frame on all sides and is not visually noticeable,
Frame has been re-guilded as required and looks amazing now