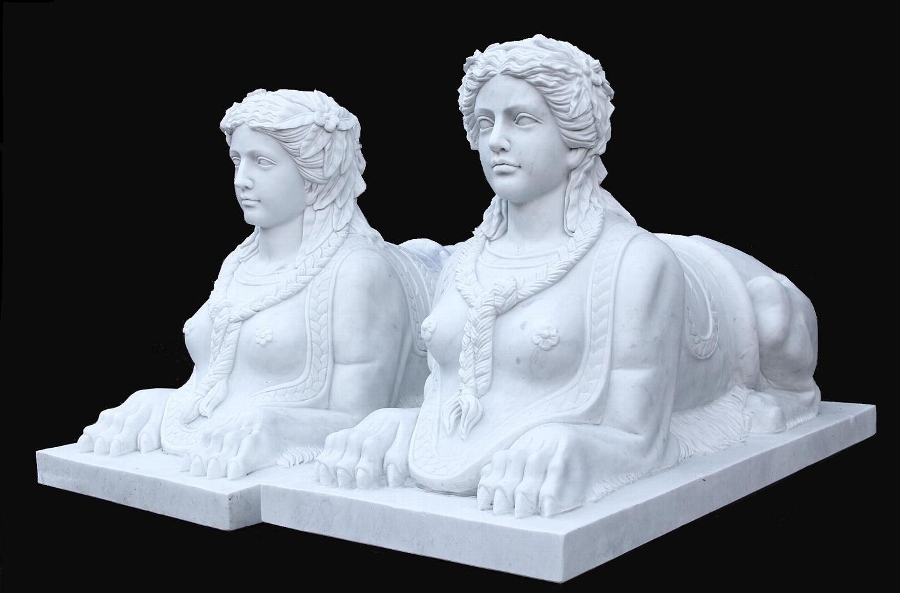 A highly unusual and truly stunning pair of large marble sphinxes ready to guard the entrance to your garden or home. These beautiful yet imposing creatures were hand-carved from solid blocks of Italian carrara marble and are sure to make an impact and become a talking point wherever they are placed. The craftsmanship is second to none and these magnificent works of art are truly something special. Each is H 70 x W 120 x D 50 cm Carrara marble, sometimes spelled Carrera marble, is a type of white or blue-grey marble popular for use in sculpture and building decor. It is quarried at the city of Carrara in the province of Massa-Carrara (Tuscany, Italy). Carrara marble has been used since the time of Ancient Rome; the Pantheon and Trajan&#39;s Column in Rome are constructed of it. Many sculptures of the Renaissance, such as Michelangelo&#39;s David, were carved from Carrara marble. For Michelangelo at least, Carrara marble was valued above all other stone, except perhaps that of his own quarry in Pietrasanta. The Marble Arch in London and the Duomo di Siena are also made from this stone, as are the interiors of Manila Cathedral, the cold-white marbles of the Sheikh Zayed Mosque and the campus of Harvard Medical School. A sphinx (Greek: &Sigma;&phi;&#943;&gamma;&xi; /sphinx, B&oelig;otian: &Phi;&#943;&xi; /Phix) is a mythical creature with a lion&#39;s body and a human head or a cat head. In Greek tradition, it has the haunches of a lion, the wings of a great bird, and the face of a woman. She is mythicised as treacherous and merciless. Those who cannot answer her riddle suffer a fate typical in such mythological stories, as they are killed and eaten by this ravenous monster. Unlike the Greek sphinx which was a woman, the Egyptian sphinx is typically shown as a man (an androsphinx). In addition, the Egyptian sphinx was viewed as benevolent in contrast to the malevolent Greek version and was thought of as a guardian often flanking the entrances to temples. In European decorative art, the sphinx enjoyed a major revival during the Renaissance. Later, the sphinx image, something very similar to the original Ancient Egyptian concept, was exported into many other cultures, albeit often interpreted quite differently due to translations of descriptions of the originals and the evolution of the concept in relation to other cultural traditions. Generally the role of sphinxes is associated with architectural structures such as royal tombs or religious temples. The oldest known sphinx was found near Gobekli Tepe at another site, Nevali ?ori, or possibly 120 miles to the east at Kortik Tepe, Turkey and was dated to 9,500 BC.

Regent Antiques has 1102 antiques for sale.
click here to see them all