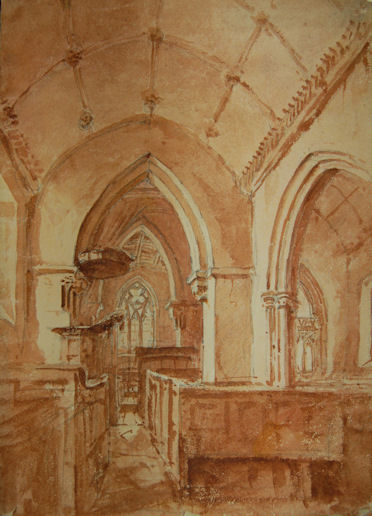 There has been a place of worship on the site of St Nicholas for over a 1,000 years, believed originally to have been an old saxon cell or chapel of the saint, St Whyte. The church was built here In the Norman time and was known as St Gregorys and only became St Nicholas after the reformation. When it was built, the church was an enlargement of an aisleless cruciform plan, with the tower between the nave and the sanctus above the chancel and appeared to have been completed in the year 1200AD.

The church has been built on and improved in many ways over the centuries. In the 13th century, the chancel was rebuilt and lengthened and the east and north transept windows were installed. The south aisle was added in the 15th century. Currently we are able to trace, and hold records of, priests dating back to1600 AD.Evidence of the churches history can still be seen in and all around the church. The south door has musket shot marks engraved into it, dating back to civil war times and in the south porch there is evidence of a Pre-Rreformation Holy Water Stoup. The beautiful east window, of the three lights, has many hidden representations: The left hand light represents, ''Christ blessing little children.''
The centre light the ''crucifixion.''
The right hand light ''Christ?s commission to his disciples to feed his sheep.'' The window also holds the inscription, ?To the Glory of God and in the memory of Henry Cole M.A. during six years curate of this parish who died April 2nd 1862 aged 35 years."
Henry Cole, gave the pulpit to the church during its refurbishment in 1861. It cost a considerable amount of money and came at great personal sacrifice to Henry, who in the process of raising the funds partly starved himself. His health was weakened by this and he unfortunately died from a severe cold and hence the installation of the window in his memory made by his many friends.
The font is Norman as is the beautifully carved old oak screen which divides the Smyth chapel from the south aisle.

That just leaves the tower, which now only contains one bell, the others having been sold to the church in Queen Charlton. The remaining bell is thought to be very valuable and was recast by Bilbie, the well known bell founder of Chew Stoke.