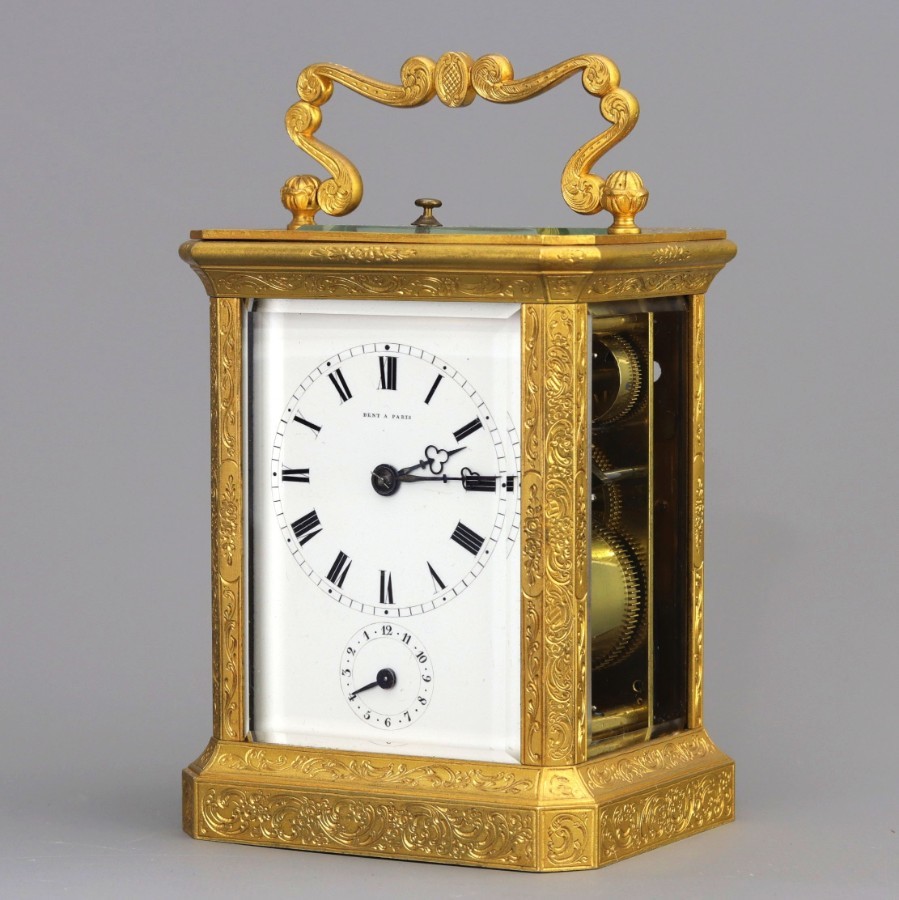 Antique Ethos has 181 antiques for sale.
click here to see them all

A quality, engraved gilt striking/repeating carriage clock with alarm c1860. Made by Paul Garnier and retailed by Dent with the dial signed “Dent A Paris”. An early example of the multi-piece carriage clock case (see Allix p159, plate VII/4 for an almost identical example). The clock is in a finely engraved, gilt brass corniche case with similarly engraved gilt ornate handle. Engraved gilt brass solid rear door with dust closure and bevelled glass panels to front, sides and top – displaying its original lever platform escapement. White enamelled dial with black Roman numerals and minute ring. Finely shaped blued-steel trefoil hands. Subsidiary alarm dial with arrow pointer and Arabic numerals. An 8-day movement (softly) striking the hours and half hour on a bell with repeat button striking the last hour. Separate train to wind the alarm – which can be left unwound and silent. Backplate stamped “Dent A Paris” and serial number 2722. Wooden block set into its hollow base casting - peculiar to Garnier's clocks (Allix p57). Measuring 15.5 cm to top of handle (12 cm excluding handle), 9 cm in width and 7.5 cm in depth. Fully cleaned and serviced. The clock's movement is covered by our 12-month warranty within the UK.
This clock is in excellent condition commensurate with age. Dials and glass are all in perfect undamaged condition. Gilt on the corniche case showing exceptionally minor signs of age with condition clearly visible in images. In perfect working order. Please see images as these form an important part of the description.

Much is already written about the renown Dent family of London clockmakers whose history goes back to 1810. Dent never had premises in Paris but were known to retail quality clocks made by other makers including Garnier, Raingo, Soldano and Drocourt – to which they added the Dent stamp and signature. Whilst not the developer of the carriage clock, Paul Garnier was the first manufacturer of the ‘standard’ carriage clock as we know it today. Garnier produced these earlier one-piece clocks in Paris from c1830. Garnier received medals in the Paris exhibitions of 1827, 1834 and 1839 for exhibits which included carriage clocks. Garnier’s son succeeded him however died in 1917. See “Carriage Clocks Their History and Development” by C Allix (Chp II The Beginning) for an in-depth account of Garnier’s work and his impact on the French clockmaking industry.

Antique Ethos has 181 antiques for sale.
click here to see them all