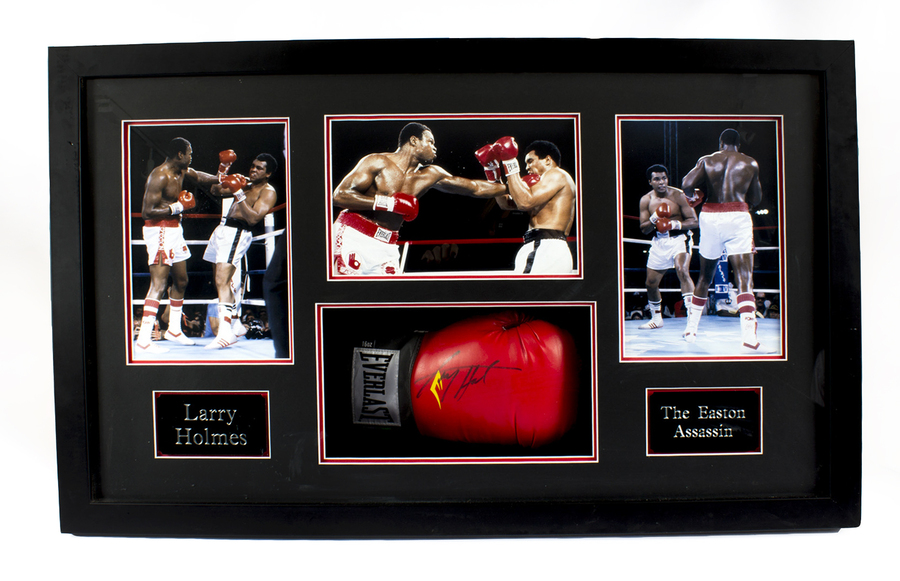 An Everlast boxing glove autographed by Larry Holmes, together with a certificate of authenticity in a decorative display case together with photographs showing him fighting Muhammed Ali.

This magnificent display piece comes complete with a certificate of authenticity dated 2014.Own a piece of boxing history!Handsomely framed in black with matt black background.Condition:In excellent condition, please see photos for confirmation.Dimensions in cm:Height 60 x Width 97 x Depth 15Dimensions in inches:Height 2 feet x Width 3 foot, 2 inches x Depth 6 inches
Our reference: 08326
Larry Holmes (born November 3, 1949) is an American former professional boxer who competed from 1973 to 2002. He grew up in Easton, Pennsylvania, which gave birth to his boxing nickname of the "Easton Assassin".Holmes, whose left jab is rated among the best in boxing history, held the WBC heavyweight title from 1978 to 1983, The Ring magazine and lineal heavyweight titles from 1980 to 1985, and the inaugural IBF heavyweight title from 1983 to 1985. He made 19 successful title defenses, placing him third all time, behind only Joe Louis at 25 and Wladimir Klitschko at 22. He also holds the record for the longest individual heavyweight title streak in the post-war boxing history. Holmes is one of only five boxers—along with Joe Frazier, Ken Norton, Leon Spinks and Trevor Berbick—to defeat Muhammad Ali; he is the only one to have stopped Ali.Holmes won his first 48 professional bouts, including victories over Norton, Ali, Earnie Shavers, Mike Weaver, Gerry Cooney, Tim Witherspoon, Carl Williams and Marvis Frazier, and falling one short of matching Rocky Marciano's career record of 49–0 when he lost to Michael Spinks in 1985. Holmes retired after losing a rematch to Spinks the following year, but made repeated comebacks. He was unsuccessful in three further attempts (against Mike Tyson, Evander Holyfield and Oliver McCall) to regain the heavyweight title, the last in 1995. Holmes fought for the final time in 2002, against Eric "Butterbean" Esch, and ended his career with a record of 69 wins and 6 losses. He is frequently ranked as one of the greatest heavyweights of all time and has been inducted into both the International Boxing Hall of Fame and World Boxing Hall of Fame.