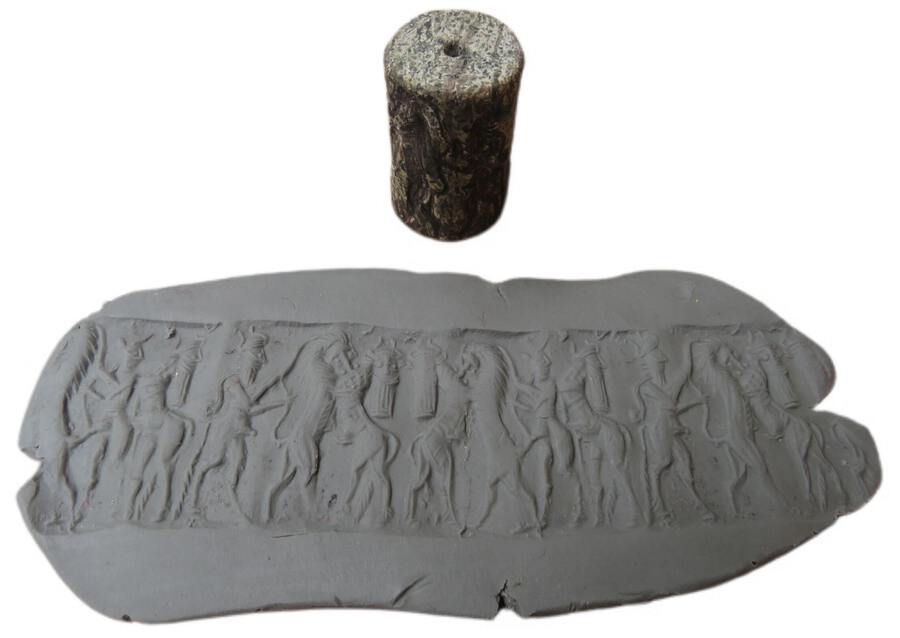 This is a small black chlorite cylinder seal pairs of contesting figures, one a man and the other a fantastic beast. This presentation is common and refers to the epic story of Gilmagesh.Gilgamesh was a king of Uruk, part man and part god. He abused his power and oppressed his people. The people cry out to the gods to send a savior. The gods create a wild man, Enkidu, to rival Gilgamesh. Enkidu embodies the wild or natural world. Though equal to Gilgamesh in strength and bearing, he acts in some ways as an antithesis to the cultured warrior-king. This seal references this legend.Cylinder seals are cylindrical objects carved in reverse (intaglio) in order to leave raised impressions when rolled into clay. Seals marked ownership, and could be official identifiers, like a signature. A seal’s owner rolled impressions in wet clay to secure property such as baskets, letters, jars, and even rooms and buildings. Cylinder seals were often made of durable material, usually stone, and most were drilled lengthwise so they could be strung and worn.Purchased from a dealer in Iraq between 2008-2010 when I was assigned to work at a U.S base.If there is interest, I will provide other details/information available prior to purchase.