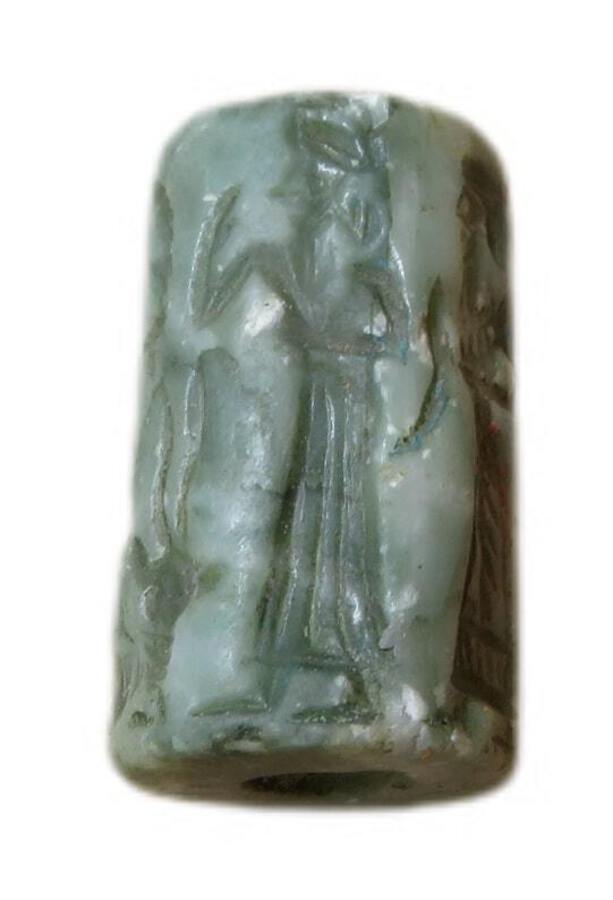 This cylinder seal is carved of green chalcedony stone and may be Assyrian. The bearded figure may be the storm god Adad, associated with divination and justice. As is the common method of depicting a divine character in the Mesopotamian world, he stands, right leg advanced, on the back of his attribute, a sacred beast. Behind him stands Shamash who deals with treaties, oaths and business transactions. Paired with Shamash, Adad is addressed as ‘lord of prayers and divination’, and invoked to preside or witness legal maatters.Before the deities stands a beardless worshipper who extends his left hand, palm up.  Cylinder seals are cylindrical objects carved in reverse (intaglio) in order to leave raised impressions when rolled into clay. Seals marked ownership, and could be official identifiers, like a signature. A seal’s owner rolled impressions in wet clay to secure property such as baskets, letters, jars, and even rooms and buildings. Cylinder seals were often made of durable material, usually stone, and most were drilled lengthwise so they could be strung and worn.Purchased from a dealer in Afghanistan between 2011-2014 when I was assigned to work at the NATO base (at Kabul International Airport).