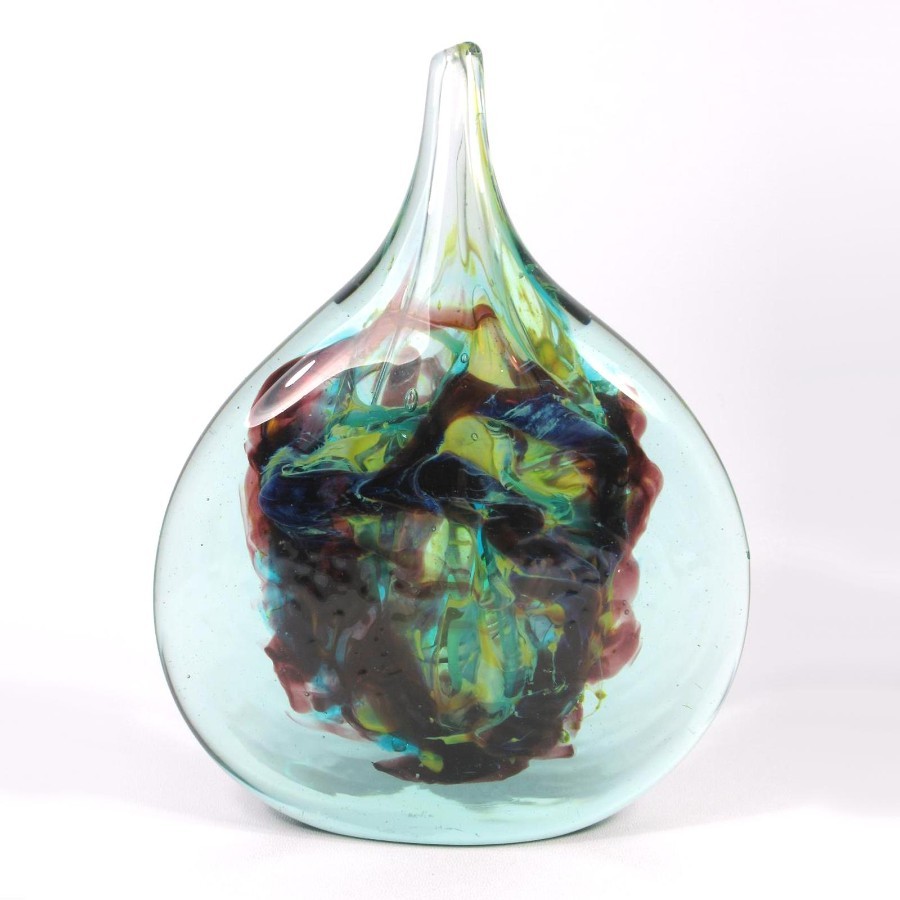 Circa: 1968 - 72Good Condition - please see images8 inches (20.5cm) height 6.25 inches (13.5cm) width X 2 inches (5cm) depth approxSigned: Michael Harris - Mdina Glass - MaltaPrice includes safe UK shipping - safe International shipping at costThe Mdina Glass factory was founded in Malta in 1968 by Michael Harris (1933 – 94), an ex- RCA tutor, who was inspired by the scenery on the island, and the colours used in the glass reflect the sun, sea and sand of the landscape. Due to the political situation he left in 1972 and set up the Isle of Wight Glass factory. Since 1981 the Mdina factory has been run by Joseph Said, one of the original apprentices, and is still producing high quality glass. The pieces from the early years are highly desirable, particularly those signed by Michael Harris himself.According to Mark Hill, author of Michael Harris: Mdina Glass and Isle of Wight Studio Glass, that incredibly rare signature could increase the worth of the piece three times over. For a small bowl by Mr Harris, the presence of a signature could bring the value up to €250. On the other hand, a highly sought-after ‘fish vase’, one of the glassmaker’s hallmark designs, could go for as much as €4,000.“There are a number of reasons why Michael’s signature is so rare,” Mr Hill explained. “Although he was the lead designer, he subscribed to the idea that the work of the company was the work of the company, not of any one person. “Michael also had a very strong feeling that his best work would be done tomorrow, so he didn’t want to put down too many markers. He was always pushing himself and his staff to do better.” We all like something that’s by the hand of the master.While the value of any individual piece is still highly dependent on its quality relative to others, Mr Harris’s signature adds a personal touch for which collectors are willing to pay a premium. “Collectors love the idea of a designer name,” Mr Hill said. “We all like something that’s by the hand of the master.” Mr Harris first came to Malta in 1968, driven by a desire to create something fresh away from the preconceptions that dominated the British glassmaking scene at the time.The early days of Mdina Glass, in fact, followed the studio glass movement that was then sweeping Europe. Instead of mass-produced factory designs, Mr Harris’s pieces were all made entirely by hand, so while they looked fundamentally similar, each piece was unique.
“The incredible thing about studio glass is that you could actually watch it being made,” Mr Hill said. “You just weren’t allowed to do that in a factory. Michael opened up the studio and allowed people to come in and see the incredible spectacle of glass being made. For many people, he was the artist.”Despite having established a highly successful business almost from the start, Mr Harris left Malta just four years later, in 1972. With a new government in power, according to Mr Hill, the feeling was that he had fulfilled his usefulness. Mdina Glass continued to consolidate and grow, but its founder returned to the UK, where he founded Isle of Wight Studio Glass, which is still owned and run by his family today.
Mr Harris passed away in 1994, but the glassworks he created are today as sought-after as they have ever been. “With Michael’s work, there’s such variety and proliferation that there’s always the challenge of finding a better or bigger one,” Mr Hill said. Moreover, as the market for decorative antiques has grown, Mr Harris’s work has the added distinction of fitting in well with modern interiors, according to Mr Hill.
“People are looking for more unusual pieces, pieces with stories that fit in their homes. Mdina Glass does that very well – it fits in just as well on an 18th-century oak coffer as it does on a 1960s teak sideboard.” While predicting the market in the face of ever-changing tastes is never easy, Mr Hill said with confidence that over the last decade, Mdina Glass has grown in popularity to become one of the most sought-after names in collectibles.“Michael was a great innovator, thinker and marketer,” he said. “It’s wonderful to see his work being appreciated for what it is: art combined with glass.”

iCollectUK has 780 antiques for sale.
click here to see them all