art deco style composition figure of a pierrot, on a black marble base, h. 50cm 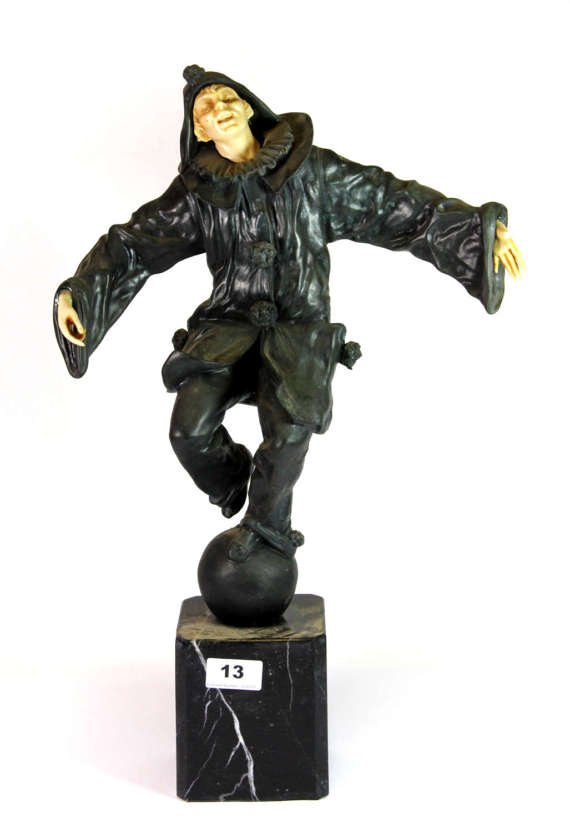 An Art Deco style composition figure of a Pierrot, on a black marble base, H. 50cm

(as this is a very large object we have to quote postage accordingly for worldwide sales)
PLEASE EMAIL WITH COUNTRYPierrot (French pronunciation: ?[pj??o]) is a stock character of pantomime and Commedia dell'Arte whose origins are in the late seventeenth-century Italian troupe of players performing in Paris and known as the Comédie-Italienne; the name is a hypocorism of Pierre (Peter), via the suffix -ot. His character in contemporary popular culture—in poetry, fiction, and the visual arts, as well as works for the stage, screen, and concert hall—is that of the sad clown, pining for love of Columbine, who usually breaks his heart and leaves him for Harlequin. Performing unmasked, with a whitened face, he wears a loose white blouse with large buttons and wide white pantaloons. Sometimes he appears with a frilled collaret and a hat, usually with a close-fitting crown and wide round brim, more rarely with a conical shape like a dunce's cap. But most frequently, since his reincarnation under Jean-Gaspard Deburau, he wears neither collar nor hat, only a black skullcap. The defining characteristic of Pierrot is his naïveté: he is seen as a fool, often the butt of pranks, yet nonetheless trusting.

About me I have collected glass and ceramics, antiques and antiquities for many years, and my shop philosophy is to sell very good antiques at very low prices very quickly so I do not need to carry much stock; larger shops will charge much more, but take much longer than I do to make a sale. Each to their own, then - but that makes my prices ultra-low compared to a bricks-and-mortar antiques shop. I try to describe everything I sell as honestly as possible, including any damage, issues, or attributions to a maker, in my descriptions. If you have any questions, a problem with a piece you’ve bought, or even further info on a piece I’m selling (always welcome!) please mail me. Please don’t ever leave negative or neutral feedback without speaking to me – we can always come to a solution Remember if you are looking for something special and cannot find in my shop,please ask me and i will source it for you.