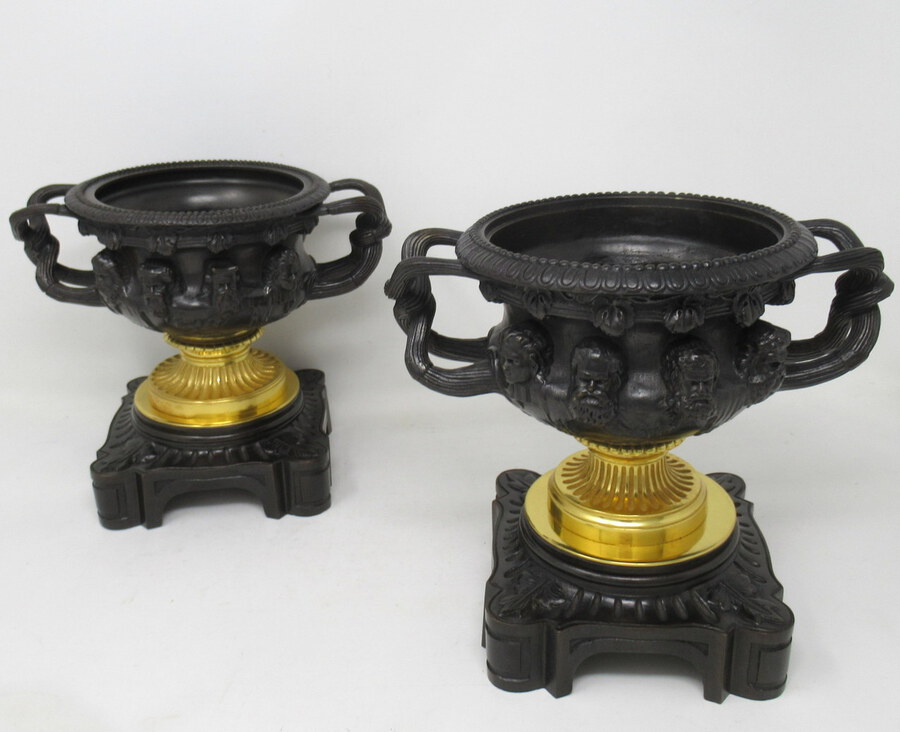 Superb Example of a Pair of French Ormolu & Bronze Cast Model of the Warwick Albani Vase of outstanding quality, circa 1860, possibly earlier.

Mounted on heavy square patinated bronze stepped bases, each with stylish leaf and reeded cast decoration. After the Antique, each vase on waisted reeded socle, cast with classical heads and reeded entwined twin handles, back and front views are similar. Condition: Superb condition with no losses or dents. Re-gilt and re-bronze patinated. These pieces are heavy. Height: (entire as shown image one) 7.25" (18.5cm). Width: (at widest across handles) 8.5" (21.5cm). Width: (at bronze base: 5" (12.5cm). Location: Dublin City, Ireland. Affordable Worldwide Store to door shipping. Note: The Warwick Vase was found in fragments by Gavin Hamilton in 1769–1770 digging in the silts of Lake Pantanello in the grounds of the Villa Tiburtina, the villa of the Roman Emperor Hadrian Roman outside Rome. It was restored in 1772–1774 by Grandjacquet to designs by Piranesi for Sir William Hamilton, who gave it to George Greville, Earl of Warwick. The Vase stood in the courtyard of Warwick Castle for almost two centuries until it was purchased for The Burrell Collection in 1979. A monumental marble sculpture in the form of a two-handled drinking cup, it is decorated with acting masks and motifs relating to the cult of the Roman god of wine, Bacchus (the Greek god Dionysos). The Vase was one of many fine sculptures with which Hadrian (who ruled the Roman Empire from 117 to 138) adorned the gardens of his palatial villa. The Dionysian imagery of many of these sculptures evoked the pleasures of life enjoyed through good wine and feasting. Since its rediscovery the Warwick Vase has been a major source of inspiration for the Neo-Classical school in the decorative arts in Britain. MORE Images can be viewed through our own website:
www.patrick-howard-antiques.com