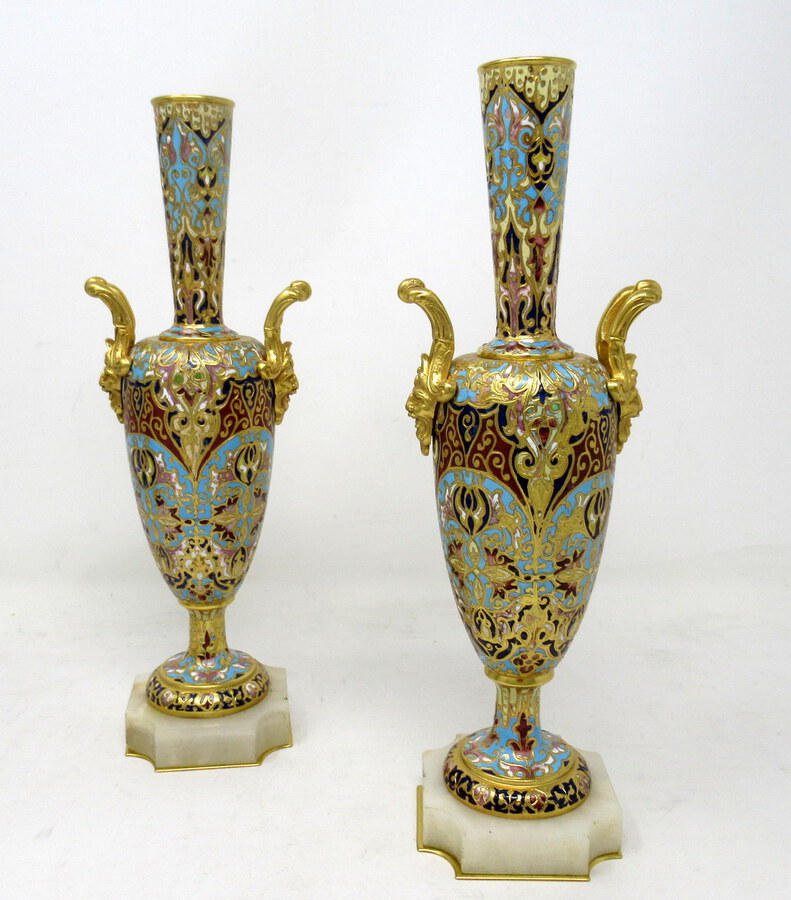 Patrick Howard Antiques has 151 antiques for sale.
click here to see them all

An Exceptionally Stylish Pair of French Cream Alabaster and Champleve Vases of outstanding quality. Third quarter of the Nineteenth Century.

This magnificent pair of Vases are wrought from Gilt Bronze and Champleve enamel in the distinctive, visually striking Renaissance Revival style. Each ovoid form body is profusely adorned with champleve enamels which is fashioned into scrolling arabesques, flowers and other geometrical motifs, all executed in colours of navy, iron red, sea green and ivory enamels. Each vase stands on a square alabaster base with canted corners and Ormolu beveled plates underneath. Gilt bronze upward handles are mounted to shoulders of each superbly cast as Satyrs Condition: Professionally restored. Few tiny losses to alabaster, nice surface patination. Height: 10” (25.5cm). Width: (at base) 2.75” (7cm). Depth: (at base) 2.75” (7cm). Location: Dublin City, Ireland. Affordable fixed charger Worldwide Store to door shipping. History of Champlevé Enamelwork No one knows exactly when champlevé was first invented, although it is likely that the process first emerged during the phase of Hellenistic Art (c.323-30 BCE) spreading northwards into the Black Sea region of Russia, before being adopted and carried into Europe by migrating Celts. At any rate, champlevé on bronze is closely associated with the La Tene style of Celtic culture. Interestingly, during the era of Roman art, the method was practiced almost exclusively in the northern provinces of the Roman Empire that were formerly occupied by Celtic tribes. (See, for instance, the Staffordshire Moorlands Pan, c.150 CE.) Celtic enameling endured in northwest Europe, especially in Ireland, where it influenced Medieval Christian art up until the 12th century. The main colours seen in Celtic enamelwork included a red, which some experts believe was intended as an imitation of red coral (see, for instance, the Witham Shield); along with bright yellow and blue; while the base was usually bronze. Other specialties' of Celtic enamellers were their use of millefiori glass, which they fused into a ground of coloured enamel, and their increasingly ornate penannular brooches. Nearly all Late Celtic enamelwork featured the champlevé technique together with curvilinear designs.

Patrick Howard Antiques has 151 antiques for sale.
click here to see them all