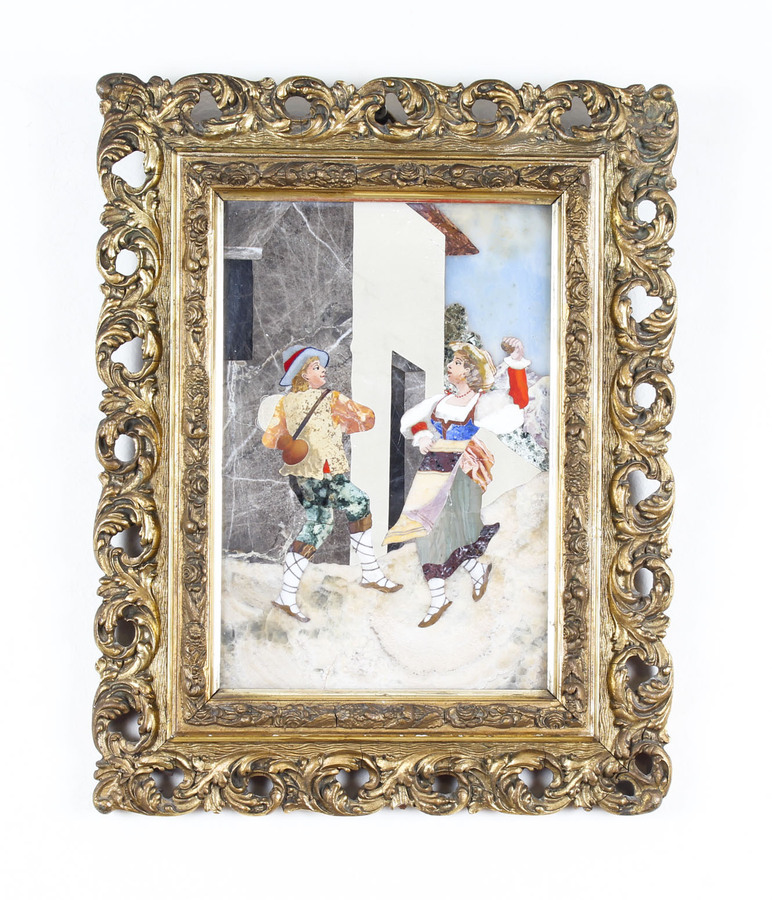 This is an exceptional Italian antique Grand Tour PietraDura plaque set in a stunning Florentine hand-carvedgiltwood frame, dating from the late 19thcentury.

This stunning Pietra Dura plaque is of rectangular shape and was made with superb skill and artistry from many different hand-carved semi-precious stones.It features a joyful scene of a man and woman dancing in Tyrolean style costumes in front of their house. The scene is captured in very high detail and the inlaid decoration in the various specimen hardstones is of the highest quality.The plaque is framed in its original hand-carvedgiltwood frame.Add this beautiful antique Pietra Dura plaque to a special wall in your home.
Condition:
It is in really excellent condition and is a delightful scene which will grace any room in your home.Dimensions in cm:Height 41 x Width 32 x Depth 4Dimensions in inches:Height 1 foot, 4 inches x Width 1 foot, 1 inch x Depth 2 inches
Our reference: 09590
Pietra dura is a term for the inlay technique of using cut and fitted, highly polished coloured stones to create images. It is considered a decorative art.Pietre dure is an Italian plural meaning "hard rocks" or hardstones; the singular pietra dura is also encountered in Italian. In Italian, but not in English, the term embraces all gem engraving and hardstone carving, which is the artistic carving of three-dimensional objects in semi-precious stone, normally from a single piece, for example in Chinese jade.The traditional convention in English has been to use the singular pietra dura just to denote multi-colored inlay work. However, in recent years there has been a trend to use pietre dure as a term for the same thing, but not for all of the techniques it covers, in Italian.But the title of a 2008 exhibition at the Metropolitan Museum of Art, New York, Art of the Royal Court: Treasures in Pietre Dure from the Palaces of Europe used the full Italian sense of the term, probably because they thought that it had greater brand recognition. The material on the website speaks of objects such as a vase in lapis lazuli as being examples of "hardstone carving (pietre dure)"The Victoria & Albert Museum in London uses both versions on its website, but uses pietra dura. "A method of inlaying coloured marbles or semi-precious stones into a stone base, often in geometric or flower patterns...."The Grand Tour was the traditional trip of Europe undertaken by mainly upper-class European young men of means. The custom flourished from about 1660 until the advent of large-scale rail transit in the 1840s, and was associated with a standard itinerary.It served as an educational rite of passage. Though primarily associated with the British nobility and wealthy landed gentry, similar trips were made by wealthy young men of Protestant Northern European nations on the Continent, and from the second half of the 18th century some South American, U.S., and other overseas youth joined in. The tradition was extended to include more of the middle class after rail and steamship travel made the journey less of a burden.The primary value of the Grand Tour, it was believed, lay in the exposure both to the cultural legacy ofclassical antiquityand theRenaissance, and to the aristocratic and fashionably polite society of theEuropeancontinent. In addition, it provided the only opportunity to view specific works of art, and possibly the only chance to hear certain music. A grand tour could last from several months to several years. It was commonly undertaken in the company of a knowledgeableguideortutor.The Grand Tour not only provided aliberal educationbut allowed those who could afford it the opportunity to buy things otherwise unavailable at home, and it thus increased participants' prestige and standing. Grand Tourists would return with crates of art, books, pictures, sculpture, and items of culture, which would be displayed in libraries,cabinets, gardens, anddrawing rooms, as well as the galleries built purposely for their display; The Grand Tour became a symbol of wealth and freedom.