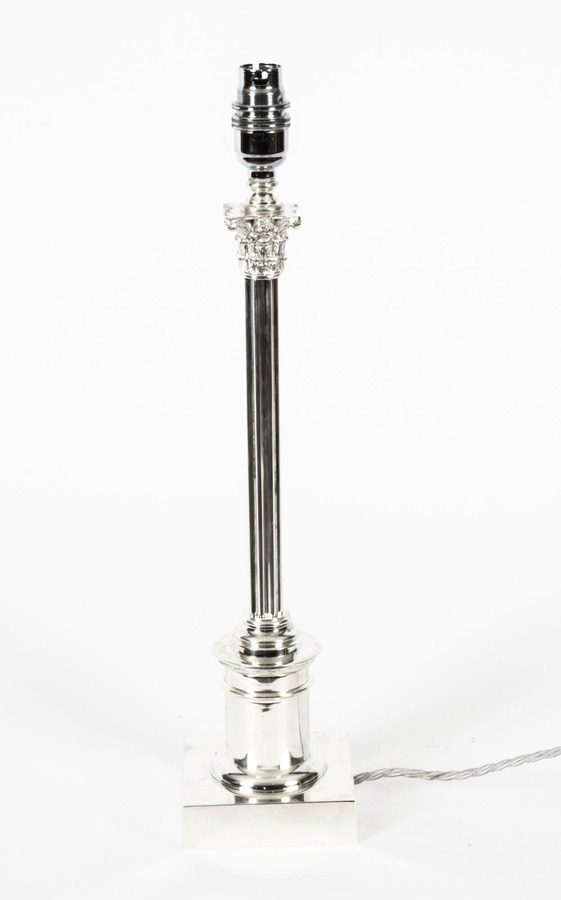 This is an impressive antique Edwardian silver plated Corinthian column table lamp, circa 1910 in date.

It features a classic Corinthian Capital decorated with acanthus leaves and anthemion with a thin cylindrical fluted shaft on a circular pedistal raised on a square stepped base.Add an element of pure luxury to your home with this antique silver plated table lamp.
Condition:In excellent working condition having been beautifully cleaned and rewired, please see photos for confirmation.Dimensions in cm:Height 43 x Width 10 x Depth 10Dimensions in inches:Height 1 foot, 5 inches x Width 4 inches x Depth 4 inches
Our reference: A1516d
Corinthian capitalIt has been suggested that the foliage of the Greek Corinthian capital was based on the Acanthus spinosus, that of the Roman on the Acanthus mollis. The leaves are generally carved in two "ranks" or bands, like one leafy cup set within another. One of the most beautiful Corinthian capitals is that from the Tholos of Epidaurus (400 BC); it illustrates the transition between the earlier Greek capital, as at Bassae, and the Roman version that Renaissance and modern architects inherited and refined.In Roman architectural practice, capitals are briefly treated in their proper context among the detailing proper to each of the "Orders", in the only complete architectural textbook to have survived from classical times, the Ten Books on Architecture, by Marcus Vitruvius Pollio, better known just as Vitruvius, dedicated to the emperor Augustus. The various orders are discussed in Vitruvius' books iii and iv. Vitruvius describes Roman practice in a practical fashion. He gives some tales about the invention of each of the Orders, but he does not give a hard and fast set of canonical rules for the execution of capitals.Two further, specifically Roman orders of architecture have their characteristic capitals, the sturdy and primitive Tuscan capitals, typically used in military buildings, similar to Greek Doric, but with fewer small moldings in its profile, and the invented Composite capitals not even mentioned by Vitruvius, which combined Ionic volutes and Corinthian acanthus capitals, in an order that was otherwise quite similar in proportions to the Corinthian, itself an order that Romans employed much more often than Greeks.
Ancient builders developed several Orders, or rules, for the design and proportion of buildings, including the columns. Doric is one of the earliest and most simple of the Classical Orders set down in ancient Greece. An Order includes the vertical column and the horizontal entablature.Doric designs developed in the western Dorian region of Greece in about the 6th century BC. They were used in Greece until about 100 BC. Romans adapted the Greek Doric column but also developed their own simple column, which they called Tuscan.