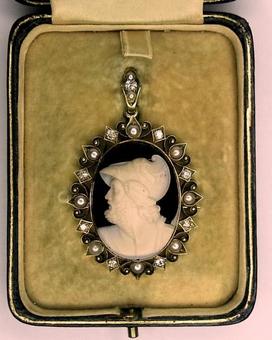 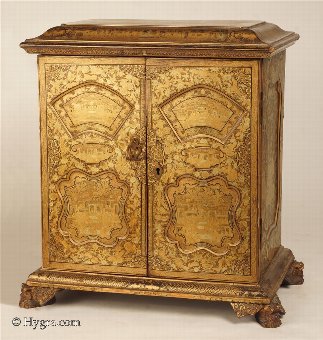 Hygra.com Antique Boxes has 25 antiques for sale.
click here to see them all

Ref: 922chcab http://hygra.com/box/922chcab
Arare compendium cabinet in Chinese export lacquer, which exemplifiesand combines many fine characteristics of such work. The top opens toa sewing compartment complete with carved ivory tools. The seconddrawer is fitted with a jewelry tray, the third drawer is empty andthe fourth, which is double the depth, pulls out completely and folds down into a writing box. The whole piece is structured so that the cartouched centers are sunk in, giving a three dimensional effect. The framing borders are on the doors and sides are elaborately decorated with objects and creatures rich in symbolism. Amongst others, there are bats symbolic of good fortune, butterflies and flowers denoting love, bottle gourds and scrolls, symbols of the Immortals.

The central scenes are minute representations of figures in gardens and pavilions.The top of the cabinet is decorated with a detailed scene of figures on the terraces of an important structure, most probably a palace. The whole is framed by an elaborate design of a ruyi scepter. This does not have the meaning of a mace of office. It is a graphic device which figures in important texts, including Buddhist's writings and which symbolizes the wishes for the fulfillment of an ambition. This central cartouche is surrounded by dragons chasing a flaming pearl. The dragon was the multi layered symbol of the Emperor, the Son of Heaven. The Emperor was the only person allowed to have five clawed dragon motifs. The dragons here have four claws, four clawed dragons being the prerogative of princesses. The corners feature realistic and mythical animals.The inside lid is finely decorated with warring scenes arranged in an oval flanked by exquisitely painted grasses. The banners refer to the three armies of the Romance of the Three Kingdoms . The border is painted with peacocks and the facings with peacock feathers.The inside door panels and the back are decorated with vases. The word for vase, ping, is phonetically the same as the word for peace. The vase is also deeply symbolic with its connotations of the womb of deities. It is one of the symbols of the Buddha and denotes perfect wisdom. The vases are further enriched with representations of peacocks, orioles and butterflies around flowers. The flowers are peonies, the Queen of flowers, a symbol of wealth and distinction. It was believed to be the only flower who dared disobey the order of Empress Wu to bloom at her will.The cabinet stands on dragon feet, a pearl held in the mouth of each. Pearls spat out by dragons during storms were highly significant, denoting the substance of the soul.The decorative significance of this piece is so rich that it almost provides a complete record of the work carried on export lacquer during the most important years of this art. 14.5" wide when closed. Circa 1820-40.
Figure237 AntiqueBoxes, Tea Caddies, and Society, 1700--1880, AntigoneClarke & Joseph O'Kelly 2nd Ed.

Hygra.com Antique Boxes has 25 antiques for sale.
click here to see them all