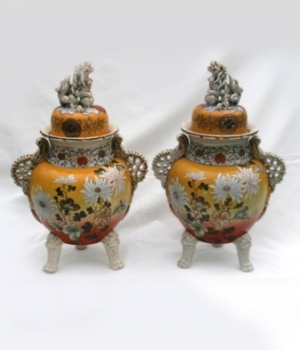 Ref 11449 - A fabulous pair of yellow 19th century Japanese Kutani two handle lidded vases, the lids with dogs of Fo. The vases standing on tripod legs, the body decorated with flowers and butterflies in relief. There are some hairline cracks on the inside of the top rims, quite common for this type of porcelain. There is some form of signature on the underside of the vases. Circa 1880. Height 18 inches, 46 cms.

Kutani ware is a style of Japanese porcelain which was first produced in the mid 1650s in the area of Kanazawa, Komatsu, Kaga, and Nomi in Ishikawa Prefecture, Japan. Goto Saijiro, a member of the Maeda clan, set up a kiln in the village of Kutani (now part of the city of Kaga) on the order of Maeda Toshiharu, ruler of the Kaga domain. The porcelain style is known for multiple colors such as greens, blues, yellows, purples, and reds and bold designs covering most of the surface of each piece.After discovering the high quality clays necessary to produce porcelain in the area of the village of Kutani in the Daishoji Domain (now mostly part of the city of Kaga in Ishikawa Prefecture), Maeda Toshiharu ordered Goto Saijiro to go to Arita in Saga Prefecture to learn how to make porcelain. Maeda did this to increase his political and personal fortune. Recently, a theory has been put forward that most or all of the Kokutani ware was actually created in Arita rather than just influenced by the ceramics being created there.A kiln was set up by 1656, and Kutani ware was produced until about 1704-1710, though the reasons for this closure are debated. Theories put forward include that supplies of the pigments necessary for the glazing were difficult to find, or that there were financial difficulties. This period of production is now referred to as the Old Kutani. The kiln was re established in the 1820s and Kutani ware began being produced again. Additional kilns were established over the years, and many variations on the Old Kutani style appeared.A memorial to Goto has been erected near an old Kutani ware kiln in the city of Kaga. The style of producing Kutani was named a traditional craft in 1975. There are now several hundred companies which produce Kutani ware.