a silver plate and marble statue of alois lutz by kauba 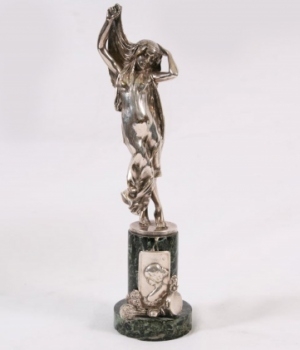 Ref 11480 - An early 20th century silver plate statue on a green marble base of Alois Lutz by Carl Kauber. The statue is signed by Kauba and has the inscription "Geschutzt 5805" around the rim if the statue. (Geschutzt is a mark sometimes found on antiques of German/Austrian origin which translates to protected or copyrighted; similar in meaning to the U.S. patented and pat. pend. marks). The bottom of this lady''s robe is marked Lutz. Alois Lutz was a famous Austrian skater in the early part of the 20th century, at the time when Kauba was at his peak, and it is more than likely that she was the model for this statuette. She was the first to perform and subsequently made famous the The Lutz which is a figure skating jump, named after her in 1913. It is a toepick-assisted jump with an entrance from a back outside edge and landing on the back outside edge of the opposite foot. Measures 10 inches high , 22 cms.

Carl Kauba was born August 13, 1865 in Vienna, Austria. The son of a shoemaker, Kauba chose to follow his calling into the world of art. Collectors now rank him in a class with Remington and Russell as one of the great portrayers of American Western. His subjects were typically American Indians, calvarymen, cowboys, and roughriders. In addition to his American bronzes, Kauba produced a lifetime’s worth of Austrian statuary. His work has been fully appreciated on both sides of the Atlantic. Carl studied at the Academy of Fine Arts in Vienna under professor Laufenberg. Later he would study at the academies under Carl Waschmann and Stefan Schwartz and in Paris in 1886 to further study. Kauba’s fascination with the West was fed by the stories of the German writer, Carl May, whose tales of Western adventures were known throughout Europe. It has been suggested that Kauba traveled to the American West when he was about twenty-five years old, possibly returning to Austria with voluminous notes, sketches, and several models of Western sculpture. However the majority of scholars feel that the artist actually never traveled to the United States at all, but instead relied upon the accounts of others and first hand artifacts to execute his bronzes. Without a doubt, his work is most worthy of artistic merit. His bronzes, all produced in Austria, were of the American West. The polychrome finish, intricate detail, and the realistic forms make Kauba’s sculptures excellent examples of Viennese bronzes at the turn of the century. Most were cast for the American market between 1895 and 1912 and were widely advertised and sold by Latendorfer in New York during the 1950’s. In contrast to most artists, Kauba’s business successes were equal to his artistic achievement. He was able to maintain for his wife and three children a comfortable lifestyle. Kauba’s studio and home were in direct proximity of each other, allowing him more freedom in allocating his time. Kauba personally directed the casting of his clay models in local foundries. Kauba expressed a great affection for Indians of the American West. He loved ornament, and this detail is seen in the reins of his horses, Indian headdresses, weapons, and costumes. He frequently created scenes of high drama depicted in his bronzes of cowboys and Indians. Kauba’s work is in the Harmsen Collection of American Western Art. After his death in 1922, his son continued the business operation. Some of his original moulds are still in current Viennese foundry, Fuhrmann & Co.
(Thanks to FADA)