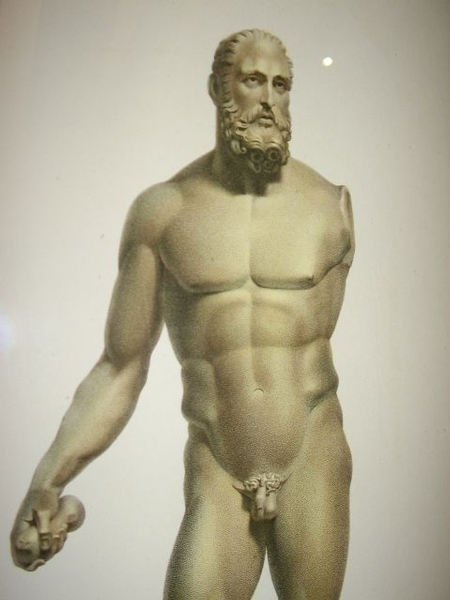 antiques available from other sellers in art > etchings

PRODUCTION METHODS:This restruck etching has been hand-produced using genuine steel or copper intaglio plates, some of which date from as far back as the eighteenth century.
Each impression is carefully crafted entirely by hand.
The etching has then been carefully hand coloured by skilled artists This fine example was originally first published by the society of Dilettanti on February 1st 1834,and were numbered in roman numerals in the upper right corner.
This particular example is after "plate XXXVII "FRAME:
Beautifully presented in a magnificent custom gilt period style frame with double border mount under glass.HISTORY OF SOCIETY OF DILETTANTI:

The Dilettante Society or Dilettanti is a society of noblemen and scholars which sponsors the study of ancient Greek and Roman art, and the creation of new work in the style.
It first met in 1732 and was formally established as a London dining club in 1734 by a group of people who had been on the Grand Tour. The group, initially led by Francis Dashwood, contained several dukes and was later joined by Joshua Reynolds, David Garrick, Uvedale Price and Richard Payne Knight, among others.The society quickly became wealthy, through a system in which members made contributions to various funds to support building schemes and archaeological expeditions.The first artist associated with the group was George Knapton.The Society of Dilletanti aimed to correct and purify the public taste of the country; from the 1740s, it began to support Italian opera. A few years before Sir Joshua Reynolds became a member, the group worked towards the objective of forming a public academy, and from the 1750s, it was the prime mover in establishing the Royal Academy.
In 1775 the club had accumulated enough money towards a scholarship fund for the purpose of supporting a student's travel to Rome and Greece, or for archaeological expeditions such as that of Richard Chandler, William Pars and Nicholas Revett, the results of which they published in Ionian Antiquities, a major influence on neo-Classicism in Britain.The Society has 60 members, elected by secret ballot. An induction ceremony is held at a London club. It makes annual donations to the British Schools in Rome and Athens, and a separate fund set up in 1984 provides financial assistance for visits to classical sites and museums.CONDITION:Excellent throughout wth no marks or fading seen.
The image is sharp and full of realism.Measurements:
Height: 23.2 Inches
Width: 20 InchesTELEPHONE ENQUIRIES: 07765 856171
HOURS 10 AM - 10 PM 7 DAYS A WEEK.DELIVERY UK MAINLAND & WORLDWIDE.
QUOTES AVAILABLE ON REQUEST.OUR REF: 0373/1NOTE:
4 OTHER EXAMPLES AVAILABLE