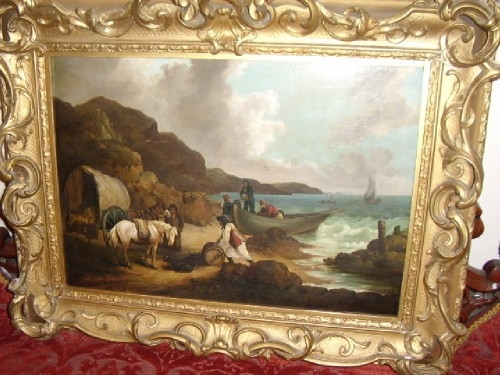 A fine quality signed oil painting on canvas,believed to have been painted between 1792 and 1800, and attributed after studio of famous listed artist George Morland.

The scene depicts smugglers,having rowed ashore, meeting up with gipsy travellers in a rocky cove,to load their wagon with stolen barrels of drink.BRIEF HISTORY OF ARTIST:The artist was born on 26 June 1763 in London, the son of the painter H. R. Morland to whom he was first apprenticed for seven years in 1777. He visited Calais and St-Omer in 1785 by which time he was painting sentimental genre scenes, somewhat in the manner of Boilly. In 1786 he married Anne, the sister of William Ward who engraved sixty-nine of Morland’s pictures and who married Morland’s sister. In the 1790s he turned to rustic genre, but his later years were clouded by reckless self-indulgence. He exhibited intermittently at the SA 1777-91, FS 1775-82, and Royal Academy, London 1773-1804.
He died of a brain fever in London on 29 October 1804.The painting is presently being cleaned and revarnished and will be sold in excellent order and ready to hang.The original period frame is being refreshed and finished in real gold leaf.We can refer you to study further important information re this painting,which reveals that a identical version which was bequeathed in1992, can be viewed in the Fitzwilliam Museum at the University of Cambridge in the United Kingdom.COPY & PASTE LINK BELOW INTO BROWSER:http://www.fitzmuseum.cam.ac.uk/opac/search/cataloguedetail.html?&priref=3675&_function_=xslt&_limit_=10#1Also,there is yet another further contempory version, attributed to the artist George Morland,but probably a slightly later copy,which can be seen on display in the National Maritine Museum in London.COPY & PASTE LINK BELOW INTO BROWSER:http://www.nmm.ac.uk/collections/explore/object.cfm?ID=BHC1077The painter George Morland (1763-1804) specialized in images of rough, mostly rural characters. This coastal scene, which has been attributed to him, but is most likely to be a contemporary copy, depicts the popular topic of smuggling. A print, dated 1793, of the same motif (PAH7348) drawn by Morland and engraved by James Ward forms the basis for this identification. Both images show a small boat being unloaded with a few barrels onto the rocky shore in the foreground. A man is moving them onto a horse and cart. Other boats are at sea and perhaps are meant to represent other smugglers. In the late 18th century and early 19th century a scene like this fulfilled the audience’s appetite for romantic and adventurous narratives, also reflected in contemporary literature.SPECIAL MENTION:
Moorland was also hugely copied and even his originals are widely debated.
He was an alcoholic who forged many pictures himself and had a studio that churned paintings out,which he would later sign.Our version could be such a painting,seemingly produced by his studio,as the artists name is seen spelt incorrectly by missing a letter in the name,indicating this may well be his work when moorland when drunk,but we shall never know.THE ARTIST HAS SIGNED OUR VERSION ON THE BARRELL AS SIMPLY " MORLA(N)D " having missed out the capital 'N'.
The first letter 'M' is seen as fairly worn away. The frame has an early Boots picture framing & regilding label on verso.
PASTE & COPY LINK ON BOOTS HISTORY BELOW
http://www.boots-uk.com/About_Boots/Boots_Heritage/Boots_History.aspxAlso.there is a second label advising to be careful when handling the frame with fingers,indicating the frame had been sent in for re-leafing at their studio.FULL BIOGRAPHY OF ARTIST /COPY & PASTE LINK
http://en.wikipedia.org/wiki/George_MorlandMeasurements to Include Frame:
Height: 23.5 Inches
Width: 30.5 InchesTELEPHONE ENQUIRIES: 07765 856171
HOURS 10 AM -10 PM 7 DAYS PER WEEK.DELIVERY UK MAINLAND & WORLDWIDE
QUOTES AVAILABLE ON REQUESTOUR REF: 0366