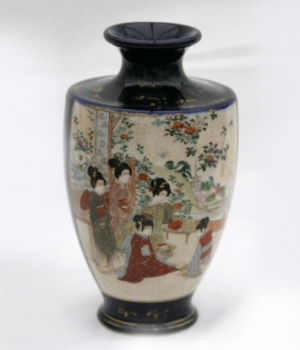 Satsuma ware (satsuma-yaki), sometimes referred to as "Satsuma porcelain", is a type of Japanese earthenware pottery. It originated in the late 16th century, during the Azuchi-Momoyama period, and is still produced today. Although the term can be used to describe a variety of types of pottery, the best known type of Satsuma ware has a soft, ivory-colored, crackled glaze with elaborate polychrome and gold decorations.Satsuma ware originated when the Shimazu prince of the Satsuma domain in southern Kyushu abducted skilled Korean potters after Toyotomi Hideyoshi''s Japanese Invasions of Korea to establish a local pottery industry. After display at the international exhibition in Paris in 1867, it proved popular as an export to Europe.