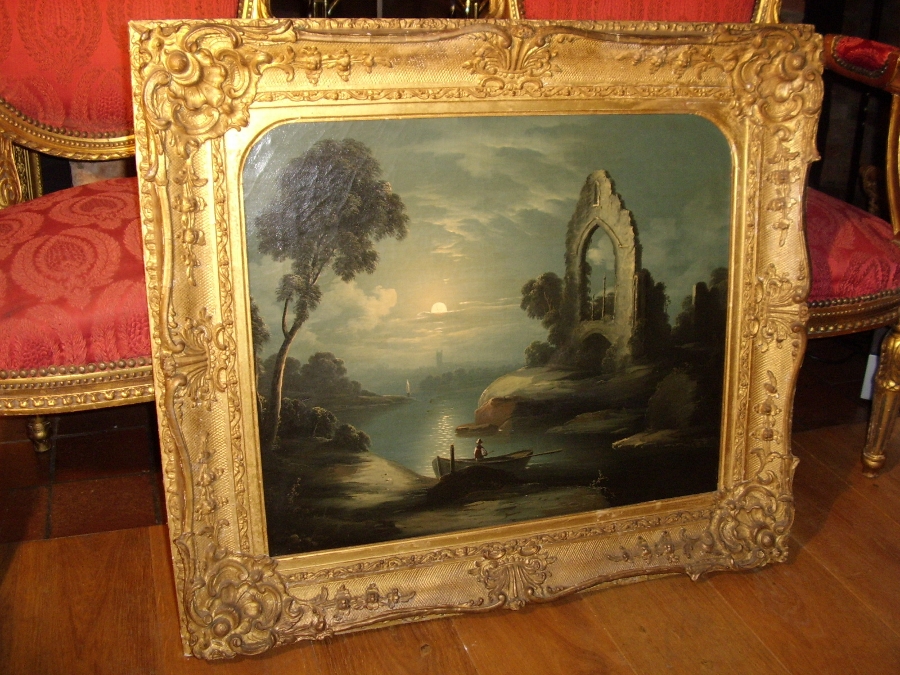 ABOUT THE ARTIST
Abraham Pether (1756 – 13 April 1812) was an English landscape painter, recognised for his skill in depicting moonlit scenes. He was also a talented musician, inventor, mathematician and philosopher.Abraham was born in Chichester in Sussex, and was a cousin of notable engraver William Pether. In childhood he showed a great talent for music, and at the age of nine played the organ in one of the Chichester churches. Adopting art as his profession, he became a pupil of George Smith, whom he greatly surpassed.He painted river and mountain scenery, with classical buildings, in a pleasing though artificial style, somewhat resembling that of Richard Wilson; but his reputation rests on his moonlight subjects, which attracted much admiration, and earned for him the sobriquet of "Moonlight" Pether. He was partial to the combination of moonlight and firelight, as in such subjects as "Eruption of Vesuvius",[3] "Ship on Fire in a Gale at Night", "An Iron foundry by Moonlight" etc., which he painted with fine feeling and harmony of colour.Pether was a major exhibitor with both the Free Society of Artists and the Incorporated Society of Artists from 1773 to 1791, and at the Royal Academy from 1784 to 1811. His "Harvest Moon", which was at the Academy in 1795, was highly praised at the time. He had an extensive knowledge of scientific subjects, and in his moonlight pictures the astronomical conditions are always correctly observed.Pether was also a clever inventor, constructing telescopes and microscopes for his own use, and lectured on electricity using instruments of his own making.[4]Although his art was popular, Pether was never able to do more than supply the daily wants of his large family, and when attacked by a lingering disease, which incapacitated him for work and eventually caused his death, he was reduced to great poverty. He died at Southampton on 3 April 1812, leaving a widow, Elizabeth, and nine children quite destitute; and the fact that they were unable to obtain any assistance from the Artists' Benevolent Fund was made the occasion of a fierce attack upon the management of that society. Elizabeth Pether later went into business with a partner as "Pether & Co.", selling black lead and chalk pencils.[5]Abraham Pether is known in the art world as "Old" Pether, to distinguish him from his sons Sebastian Pether (1790–1844) and Henry Pether (fl. 1828-1865), also landscape artists who became known for their moonlit scenes. It is thought that Abraham had a brother called Thomas Pether (they are recorded as sharing a residence); the latter was a wax modeller who exhibited portraits in wax with the Free Society of Artists from 1772-81.
CONDITION
Good Condition commensurate with age,having had some past repairs.
Recently cleaned & re-varnished.DATE
Estimated late 1790-1810FRAME
A very decorative and detailed original period gesso gilded frame,which has been recently beautifully re-gilded to enhance the stunning appearance,contrasting with the lovely blue moonlight colours.MEASURMENTS
Height 28 Inches
Width 32 Inches
Depth 2.5 InchesARTIST
Abraham Pether (Old) B.1756-D1812.TELEPHONE ENQUIRIES 07765 856171
HOURS 10 AM -10 PM 7 DAYS A WEEK.DELIVERY UK MAINLAND & WORLDWIDE
QUOTES AVAILABLE ON REQUESTOUR REF 0477 * EARLY PETHER SENIOR *