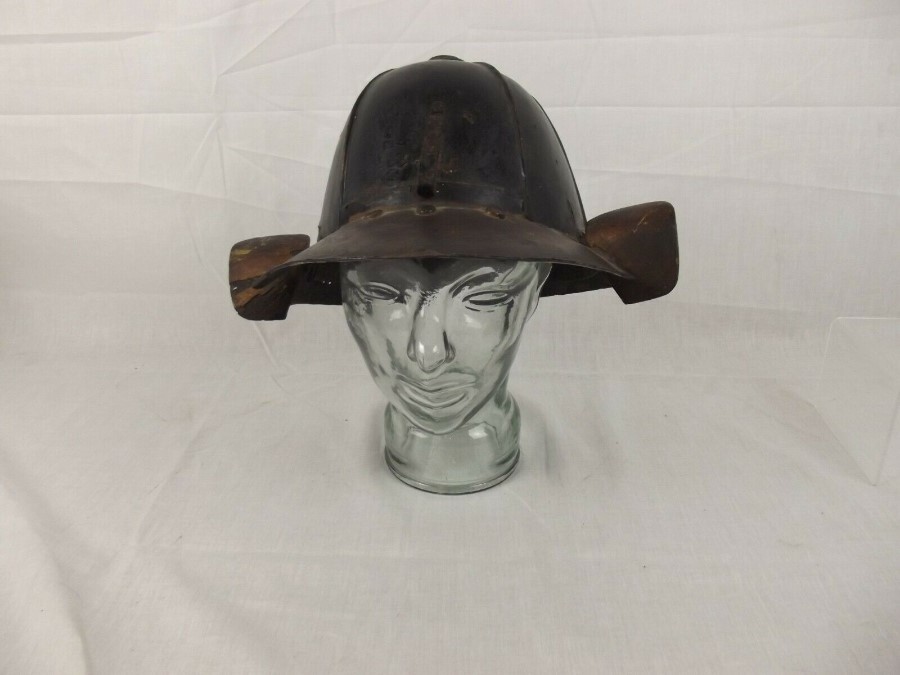 Bore Park antiques has 2263 antiques for sale.
click here to see them all

The Kabuto is a type of helmet first used by ancient Japanese warriors, and in later periods, they became an important part of the traditional Japanese armour worn by the samurai class and their retainers in feudal Japan.Note that in the Japanese language, the word kabuto is an appellative, not a type description, and can refer to any combat helmet.This is a 18th century Japanese piece of the Heichozan pattern of a Suji bachi type kabuto, a relic from the last golden era of the samurai preserving its specific elements.Its hachi (the dome) is composed of six overlapping elongated tate hagi-no-ita (plates).The Tehen - hachimanza (the small opening at the top of the hachi) is fitted with a tehen kanamono (an ornamental grommet, resembling a chrysanthemum).As seen in the pictures both Fukigaeshi, wing-like or ear-like projections to the sides of the hachi are present, as is the Mabizashi (the brim or visor on the front of the hachi).Only the first layer of the Shikoro (the suspended neck guard composed of multiple overlapping lames) is present.~ Dimensions ~The helmet has a diameter of 8 inches (20 cm).Its width front to rear is 12 ½ inches (32 cm), with a depth left to right of 11 ½ inches 929 cm) and a height of 7 ½ inches (19 cm).It weighs 1.03 Kg.~ Condition ~As seen in the pictures, the piece is in relic condition, with missing components and loss of paint.
Delivery can be arranged

We now are only operating as an internet shop, We are passing on these savings to our customers making the prices more reasonable. Having turned to the internet and finding that all over heads are kept to a absolute minimum we related that this is the best forward for any antique dealer or collector to display therein items on one to an enormous audience. We hope you enjoy all our uniquely chose items here on WWW.antiques.co.uk Nuneaton Warwickshire United Kingdom Tel: 07505 165 843 International Tel: +44 7505 165 843 We accept online payments for all our items listed: Bank transfer cash on collection personal cheques or if wishing over the phone using your debit or credit cards, also doing layby payments plan, or email giving your address details & contact number and we shall send you your items invoice to make payment with your card. Send your request to - john.strong2@gmail.com

Bore Park antiques has 2263 antiques for sale.
click here to see them all