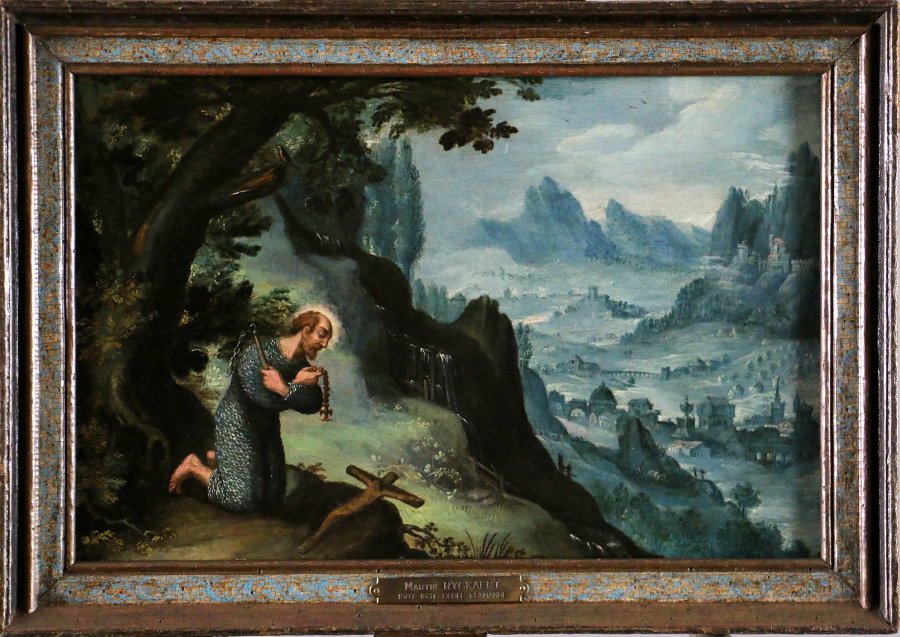 The composition is divided into two planes, left a scene from the life of St. Paul the Hermit, he is older and appeared dressed in a rough tunic made of woven palm leaves. A bird sitting on a branch above it refuels the daily.On the right a landscape with a blue cast to the valley or business life (animals and figures) we see any thoroughness in execution dear to Nordic masters.This precious oak panel is typical of productions of Martin Ryckaert, Antwerp painter (1587-1631). He probably first studied with his father and later was a pupil of Tobias Verhaecht who was also the teacher of Peter Paul Rubens for a brief period. Martin became a member of the Antwerp Guild of Saint Luke in 1607.It is believed that he traveled to Italy between 1607 and 1610, although no documentary evidence of this trip have been found. It is likely that during this stay, he practiced drawing from nature.He spends the rest of his career in his hometown and collect many paintings of his contemporaries in his house in the "Meyerstraat" in Antwerp.He was a close friend of Anthony van Dyck, who painted his portrait showing Ryckaert dressed as a King (1630). This portrait was in the possession of Martin when he died and is now in the Prado Museum in Madrid.
He fell ill in early 1631 and died in Antwerp on October 28. He bequeathed his entire fortune to his sister Maria and brother Pauwel.

Collectors and investors, we offer quality works of the 17th-and the 18th centuries without forgetting the 19th , French, Italian and Flemish School. All charts are accompanied by an informative notice as full as possible in order to inform you about the subject matter , the artistic movement and the artist's biography. You want to treat yourself, invest or even sell, please tell us about your research and your proposals

Other antiques available from gallery phc