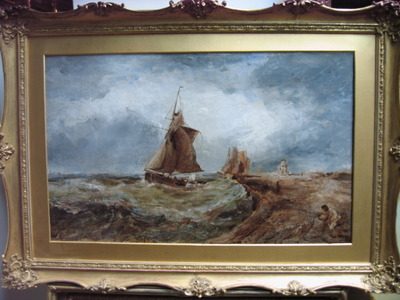 Provenance:
Purchased from The Caelt Gallery, London W11 in 1987James Webb was an artist of great versatility who painted both landscapes and marine, especially coastal views, with a highly naturalistic palette, influenced at his best by Turner. His skies are especially noteworthy and works by him are in all the major and provincial galleries.Almost certainly the son of marine painter Archibald Webb, James was born in Chelsea. His education is unknown, but he first exhibited at the age of 25 and showed at the Royal Academy most years from 1853 until 1888. In all, he showed 129 works at the major London galleries. Webb’s range of British subjects included views in Cornwall, the South Coast, the North East coast and Wales and he also travelled to Holland, Germany and France. He painted and exhibited a number of views at Honfleur, often in a large scale. This very atmospheric work shows all the spontaneity of a plein air sketch and well demonstrates his deserved reputation for dramatic views. It is a charming and most unusual painting. When first seen, this work bore an original label, signed by Webb, giving details of the picture, but this was unfortunately lost by the gallery.