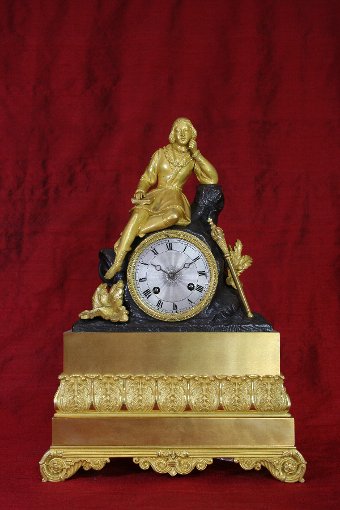 This Fine French Empire Gilded and Bronze clock signed and made by Honore Pons of Paris. Dated 1827.
The Bronze case is surmounted by a Young Prince with a Mace, symbolising the " Kings Power" . In ancient times the Mace was a wooden weapon of war, similar to a club. During the fourteenth century the Mace, by then made of precious metal and covered with jewels, had become the sybol of the King's authority.

THE MOVEMENTIt is of 8 day duration. Silk suspesion with a anchor escapment. Count wheel striking on a bell.