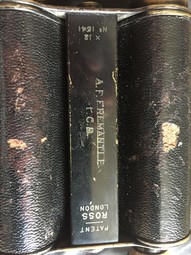 Private seller has 1 antique for sale.
click here to see them all

Owned in 1899-1900 by a Lieutenant A.F. Fremantle, formerly of the Indian/Imperial Civil Service and latterly the Indian Cavalry regiment.

Fremantle was also made a Magistrate in the Oudh / N. W, Province.Alan Frederick Fremantle was the son of Edmund Robert Fremantle who was the Commander in Chief of the Royal Navy, Plymouth in the late 19th century, and was the father of several sons who served in the Armed Forces.The binoculars are engraved A.F. FREMANTLE, ICS, and bear the name ROSS OF LONDON, an established maker of these instruments.This particular pair is a X 12 model with most other being X8 or X10.Optics are all good with just a little stiffness to the adjustment on one eye piece.
Price: £175.00

Private seller has 1 antique for sale.
click here to see them all