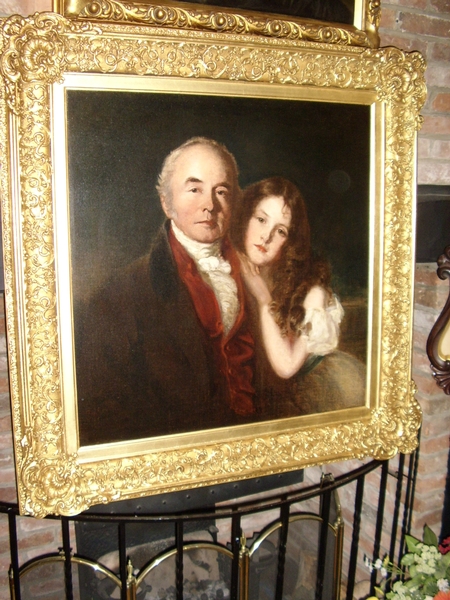 AN EXCEPTIONAL DISCOVERY OF A VERY IMPORTANT PORTRAIT WITH CLOSE FAMILY TIES AND BY ASSOCIATION TO SIR THOMAS LAWRENCE'S MOST FAMOUS PAINTING OF THE "CALMADY CHILDREN",SO WELL KNOWN & DOCUMENTED IN THE ART WORLD TODAY.

This rare portraits has been discovered recently and has been away in London for the last eight months,undergoing a full and expensive restoration to the highest of standards,to include the original gold leafed ornate frame.The portrait depicts one of the five Calmady children,namely Cycill-Christiana Calmady b1823,younger sister to the two elder famous Calmady sisters painted by Sir Thomas Lawrence.as seen in our attached final image number 5.The well known and famous portrait by Sir Thomas Lawrence is currently owned and on display in the Metropolitan Museum of Fine Art in New York and is a priceless exhibit which was recorded as sold back in 1886 by Christies for the hugh sum of £1869.This fine example we have offered for sale is painted by the portraiture artist Frederick Richard Say,and was commissioned by Emily nee-Greenwood Calmady,the childrens mother,who has hand written the following note /info on the verso:INSCRIBED VERSO:" William Greenwood Esquire - born March 1764
Died April 1844 -Painted by F.R.Say 1833 with his
Grandaughter Cycill C.Calmady,in her 10th year " ( "This Copy made 1850 by his daughter Emily Calmady ")
* The latter note is actually intended to convey the identity of the person making the inscription.ABOUT THE ARTIST:FREDERICK RICHARD SAY 1804 - 1868)
Was a notable society portrait painter in London between about 1830 and 1860, undertaking commissions for portraits of many famous and important figures such as Earl Grey, Sir Robert Peel, the Duke of Wellington and the Royal family. Emily Calmady was marriied in 1816 to a gentleman named Charles-Biggs Calmady ( b.1791 ) of Langdon Hall County of Devon.Emily nee-Greenwood Calmady's father,was William Greenwood Esq,a builder from Brookwood Hampshire,who is shown depicted with his grandaughter,when she was aged just 10 years old.ABOUT GRANDAUGHTER CYCILL-CHRISTIANA:In 1854 Cycill Christiana married William Frederick Collier.The Collier family in the early 19th century resided in Plymouth,but by the end of the century had acquired Woodtown in the parish of Sampford Spinney.
The Collier family are presently the most direct decendants of the Calmady line.CONDITION: The portrait has been wax re-lined and professionally cleaned and lightly revarnished,but retaining all the original painted surfaces.Due to age there are signs of crackleture in the fleshy areas of the arms and faces,consistant with age and normally seen with most paintings to some degree on closer inspection,but much less obvious from a reasonable distance,especially when the portrait is seen under a bright picture light.DATE PAINTED: Circa 1833MEASUREMENTS:
HEIGHT 42 Inches Inc.Frame
WIDTH: 41 Inches Inc.FrameTELEPHONE ENQUIRIES: 07765 856171
HOURS 10AM -10 PM 7 DAYS A WEEK.DELIVERY UK MAINLAND & WORLDWIDE.
VIEWING BY APPOINTMENT PLEASE REQUEST A QUOTE FOR DELIVERY COSTS & PROVIDE YOUR LOCATION POST CODEOUR REF: 0395