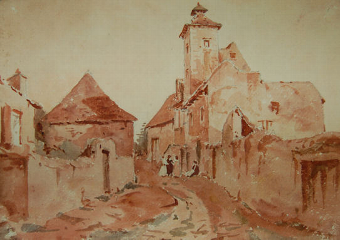 Vichy is a commune in the department of Allier in Auvergne in central France. It belongs to the historic province of Bourbonnais.It is known as a spa and resort town and was the de facto capital of Vichy France during the World War II Nazi German occupation from 1940 to 1944.The town''s inhabitants are called Vichyssois. Up until the 18th century they were more properly known as les Vichois which stems from the Occitan name of the town, Vich?i. The writer Valery Larbaud uses the term Vicaldiens after the Ancient Roman name for the community. With 80,194 inhabitants, Vichy''s urban area is the second largest in the Auvergne region behind Clermont-Ferrand. The city enjoys a continental climate climate that incorporates some characteristics of a mountainous climate because of the nearby Massif Central and Alps.Heavy snows in the Massif Central often make roads impassable, but Vichy is low enough at about 800 feet (260 metres) above sea level that the climate is more continental. Rainfall is moderate around Vichy, averaging about 30 inches (75 centimeters) annually.