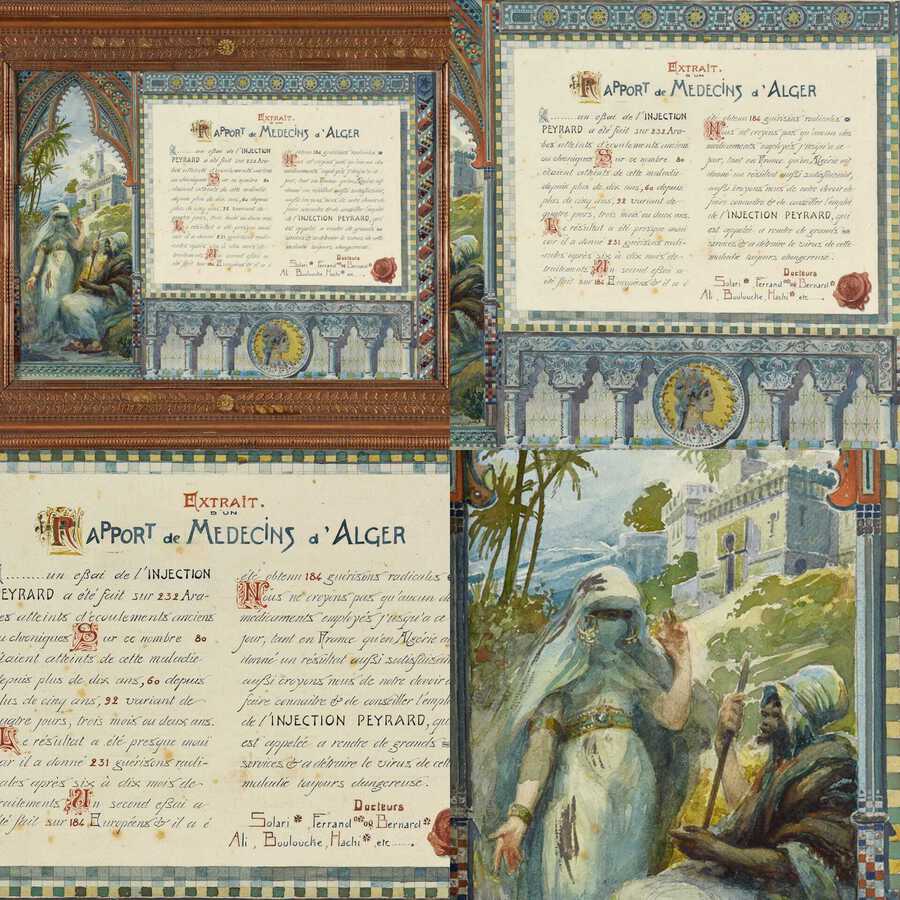 ARI ANTIQUES has 43 antiques for sale.
click here to see them all

“Very Rare Exclusive Watercolour By Gustave Clarence Boulanger.”
Report From Medecins a Alger injection Peyrard is mentioned in “Figures of healing (18th-19th centuries): A story …” Very rare exclusive watercolor by Gustave Clarence Boulanger. In 1845, Boulanger was sent by his uncle to Algeria to take care of Desbrosses’ business. Boulanger was mesmerized by everything he saw, and what was expected as a two-month stay rose to eight, until Desbrosses threatened to cut his funds. Boulanger brought back a large number of sketches which he used for his first Orientalist paintings. (This was the first of at least three trips to North Africa, including one in 1872 with Gérôme.… Africa had opened up new ones for him. horizons, had aroused in him unforgettable emotions, but had not thrown him into the great current into which Delacroix was to venture and from which, with his marvelous genius, Delacroix was to emerge unscathed. Gustave Boulanger brought back the brilliance of the Orient in his eye rather than in his thought. He dreamed of a quieter Orient, with broad lines, fine types, delicately pleated draperies; an Orient with the Greek sky. Because museums preferred to collect his classical subjects, the orientalist works of Boulanger have long been less known, but in the art market of the 21st century, they are more sought after and sell for more. unframed dimensions: 45 x 60 cm

Ari-Antiques" is a company which specialises in Russian Antiques and Islamic Antiques and also Works of Art located in U.K . With the Branches in Ukraine, Russia, Poland.The Rosita Rapetti Gallery is a fourth generation family owned and operated business, founded in Constantinople over 130 years ago. Towards the end of 19th century family owed very important collection of Russian,Islamic and European antiques. Family dedicated itself to acquiring the finest masterpieces of ancient art from around the world. Their curiousity, love, and appreciation for antiques and art has driven the collection to encompass the sacred relics of various cultures from all corners of the globe… everything from Middle East to North Russia. Multi-year acquisition of items with a careful selection of the quality and rarity of items, based on our knowledge and experience, helped to create rare collections of interest to both collectors and museums. Company specializing in Classical antiquities, Safavid, Asian, Ottoman Empire, Numismatics, European objects which has been produced for the Ottoman Market. We also specialize in Russian Imperial Antiques and Works of Art. Our clientele is varied, including museums, corporations, private collectors and investors from all over the world. For the last 27 years we have been fortunated to have assisted many important art collections around the world. With the growing worldwide interest in Islamic Antiques and Art we are planning to open one more branch in Dubai.

Other antiques available from ari antiques

ARI ANTIQUES has 43 antiques for sale.
click here to see them all