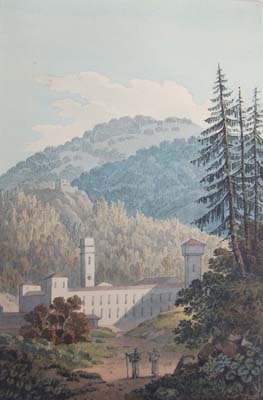 Vallombrosa is a Benedictine abbey in the comune of Reggello (Tuscany, Italy), c. 30 km south-east of Florence, in the Apennines, surrounded by forests of beech and firs. It was founded by Giovanni Gualberto, a Florentine noble, in 1038 and became the mother house of the Vallumbrosan Order.It was extended around 1450, reaching its current aspect at the end of the 15th century. In 1529, after the looting of Charles V, the east tower was built, in the 17th century followed the wall and in the 18th century the fishing ponds. Today, the monastery is open for tourists and is selling local produce.
On the 7th October 1096, Pope Urban II addressed the congregation of Vallombrosa, imploring the religious amongst them to support the cause for a crusade to the Holy Land. In particular in this sermon, he cited the need for knights, who could "restore the Christians to their former freedom"1 Largely because of his poetic reference to the ''autumnal leaves that strow the books, in Vallombrosa'' in Paradise Lost, John Milton is supposed to have visited the monastery and, according to a plaque erected during the Fascist era, actually stayed there. Though this is unlikely, the notion that he did so encouraged many later travellers to visit the place, including William Beckford, JR Cozens, William Wordsworth, Crabb Robinson, Frances Trollope, Mary Shelley and Elizabeth Barrett Browning. Partly thanks to the influence of the pioneering American ecologist and author of the 1864 Man and Nature, George P Marsh, the Istituto Superiore Forestale Nazionale was founded in the secularized monastery in 1867.
The abbey of Vallombrosa is situated really in the splendid created Forest and taken care of in the centuries by the monks and declared in the 1973 Reserve Biogenetica Naturale. In the 1008 Giovanni Gualberto, Florentine noble, that he was from little fact monk, left with a companion the monastery of St. Miniated of Florence, to find a more isolated place whether to pick up him.After a meeting with St. Romualdo, founder of the hermitage of Camaldoli, was brought already where in a denominated place " Acquabona " a small romitorio it was found where now the monastery of Vallombrosa rises wood cells were built for the new followers that reached Gualberto.In 1015 the monks elected Gualberto to them superior, and the new congregation of the monks vallombrosani was born, that followed the rule of St. Benedict founded on the precept "now et labora."In 1036 they began the jobs for the construction in masonry of the cells and the oratory. Around 1450 important amplifications were performed: the new sacristy and the places of the novitiate were built, and at the end of the XV sec. the complex assumed the characteristics and the aspect actual.In 1529, after the looting of Charles V, the tower of east was raised for defending you furnish to him and the books more jewels; in the XVII sec. the wall was built that the square closes, and at the end of the XVIII sec. the great before tub the abbey (used to raise trouts and for the production of the ice).monastery, vallombrosa, Monastery of Vallombrosa, monastry, vallombrosa, monastry of vallombrosa, monastery of vallombrosa, monkeys, tosi, accommodations tosi, accommodations vallombrosa, vallombrosa, firenze, florence, tuscanyThe monastery, suppressed during napoleonicas epoch, it was reopened in 1817 by the Granduca Ferdinando. In 1866 the newborn I Reign of Italy it evicted the monks and the monastery it passed to the Forest firm. The Benedictines returned only in 1949.The visit to the monastery is interesting a great deal: the imposing construction, dominated from the tall bell tower of the ''200 and from the tower, it has the aspect of a castle. Gone beyond the gate it is admired the beautiful fa?ade secentesca of Gherardo Silvani. Secentesca is also the fa?ade of the church, that preserve however the medieval plant, also actual it is attual characterized by interventions barocchi.
Ther eare numerous works of art that are preserved in the abbey: a bas-relief robbiano in the overlooking hallway the refectory, the fifteen cloths of Ignazio Hugford in the refectory, the wooden choir of the church carved and by Francis by Poggibonsi. Around the abbey, in the forest, in the places sacred more meaningful legacies to prodigious episodes of the life of Gualberto, chapels and datable tabernacles are found between the XVI and the XVII sec.The runs that bring to these small religious buildings offer manifold occasions of meditation to the visitor. Vallombrosani monks They form a branch of the Benedictine order; their name derives from Vallombrosa, place they climb on to about thirty kilometers from Florence, where the founder, san Giovanni Gualberto, was withdrawn around 1036 with some companions to live with renewed ardor the native spirit of the rule of san Benedict, devoting himself to the prayer, to the job, to the reception of the pilgrims. To the choice of an austere monastic life, Giovanni Gualberto was induced from a miraculous event: picked up in prayer in the church of St. Miniated to the Mountain in front of the Crucifix, after bravely the killer of his brother had forgiven, he saw the Christ fold up the head in sign of approval. I lend other monasteries to the monastic reform of Vallombrosa they were united in Tuscany and out, under the charismatic guide of the Gualberto forming the Congregation Vallombrosana officially recognized by the Pope Urbano II in 1090. The origins of the congregation vallombrosana is characterized by a powerful person wish of reform, both towards the church and of the monachesimo and from the desire to live to the letter the rule of St. Benedict. The congregation knew a long period of expansion that was maintained up to the XVI century; then it began the decline and in 1866 the Italian government decreed the general suppression of the religious orders. Meanwhile, monastic community was transferred to Pescia, where he remained up to 1949. It was only in 1961 that you/he/she could reenter in the monastery of Vallombrosa, whose ownership has remained nevertheless to the State.