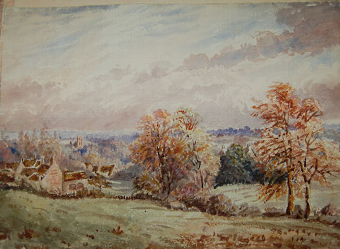 The parish of "Langeduna" is first mentioned in Domesday (1086), the name meaning Long hill. The view from the summit is admitted to be one of the finest in the kingdom. It stretches over the vale of the Thames from London to Southend, a distance of nearly 40 miles, with the hills of Kent as a background, and to the North it extends over a large tract of beautiful country to the well-wooded uplands of Brentwood and Billericay, and beyond. Originally Laindon or Langdon and Langdon Hills were one lordship in the possession of Alric, a Theyn of Edward the Confessor, but eventually as the forest got cleared, giving an improved value to the land, it was divided into two lordships which came to be called parishes. Accordingly each parish needed a distinctive name, and the word "Hills" was added naturally to the hilly part of the lordship by people who had by this time forgotten the derivation of the name. "South Langdon" or "Upper Langdon" would perhaps have been a more suitable name, or as Morant (1768) suggests, "Langdon with the Church of Westley."Westley or West Lee was formerly another parish about a mile to the East, and was united to Langdon Hills in 1432. This must not be confused with Lee Chapel or East Lee, which was an extra-parochial district, now united to Laindon, and had a Chantry Chapel which has long since disappeared. The poverty of both places was alleged as a reason for the union. It is recorded that Langdon "as well thro'' the Malice of Men as by the Mortality of Cattle, and the neglet of Tilling the Ground, was so depauperated, that it was not sufficient to sustain the Rector, and enable him to maintain such convenient Hospitality as was requir''d, to keep the Chancel and Mansion-House and other buildings belonging there-unto in Repair, and to support the other Burdens of the said Church."West Lee was anciently the possession of Edith, daughter of Godwin, Earl of Wessex, and Queen of Edward the Confessor. All traces of the Church have now completely gone, and even its site is unknown, but it probably stood somewhere near West Lee Manor House. West Lee signifies the West pasture, which it was in respect of the other already referred to as East Lee.

At the time of the survey (1086) the parish belonged to the Canons of S. Paul''s and hath so continued to the present time. In the 14th Century they granted 20 acres of this Manor to the Bauds of Corringham on condition that the latter should present yearly a buck and a doe to be offered at the high altar of S. Paul''s, also "two special sutes of vestments, one embroidered with a buck and one with a doe." And in 1313 Edward II granted to this Manor the immunity "that no King''s purveyor should take any corn within its precincts."The Manor of Langedon after the Survey belonged to Suene of Essex and his under-tenant Walter. Subsequently, Suene''s grandson, Henry de Essex, lost all his possessions in 1163 through his cowardice. He was hereditary standard-bearer to Henry II, and during this King''s campaign in Wales on a certain occasion, Henry de Essex threw down the royal standard and fled, causing the King''s army to be thrown into confusion and routed.After Henry de Essex, the next owner was John de Langedon; but the Knightly family of Sutton seems to have been lords paramount, for Robert de Sutton gave in frank marriage with Margaret his daughter, among other things, the suit of all his lands at Langedon with the advowson of that Church, to William, son of Hugh Bigod, first of that Christian name, Earl of Norfolk, which grant was confirmed by King John in 1209. This reference proves the existence of a church here before that date, some remains of which may be traced in the present building. The de Langedon family held the manor from 1163 to 1382, when the last representative died without issue, and his lands were seized into the King''s hands by John Ewell, the King''s Escheator.It is possible there may have been a Church here from Saxon times. In the year 654 S. Cedd was consecrated Bishop of the E. Saxons, and in Bede''s Eccles. History (8th cent.) we read of his zeal in preaching and building Churches in several places; and since Tilaburgh (Tilbury) was one of the chief centres of his labours, he must have been at least familiar with "Langeduna," and often travelled over its summit.Whether the first Church here dates from Saxon times or from the 13th Century, it would probably be constructed partly of timber, like so many of the ancient Essex Churches, owing to the lack of local building stone. If it were built at the latter date it would be in the Early English style of architecture. The patronage of the Rectory of Langdon Hills was in Beeleigh Abbey until 1432, when upon the union with West Lee, the Abbey reserved two turns, and the third was allowed to S. Paul''s. But since the Disolution of the Monasteries in the 16th Century, the whole right of patronage of the united parishes has been in the Dean and Chapter of S. Paul''s.The Church is most picturesquely situated on the Western slope of the hill. Its position was evidently determined by that of the old Manor House which was close at hand, where part of the moat still exists. At one time this must have been a most secluded spot in the midst of the forest, and it may still be regarded as one of the beauty spots of Essex.John Louis Petit was born at Ashton-under-Lyne, Lancashire, son of John Hayes Petit. He was educated at Eton, and contributed to the "Etonian". He was elected to a scholarship at Trinity College Cambridge in 1822, graduated BA in 1823 and MA in 1826, and on 21st June 1850 he was admitted "ad eundem" at Oxford. He took holy orders in 1824, but undertook no parochial work. Petit showed a taste for sketching in early years. His favourite subject was old churches, and a great part of his life was spent in visiting and sketching them. In 1839 he made his first extensive tour of the continent. The results appeared in his "Remarks on Church Architectire" (1841, 2 vols which had illustratuions. It was followed in 1846 by "Remarks on Church Architectural Character" Royal folio format.In the same year Petit published a lecture which he had delivered on 24th Feb 1846 to the Oxford Society for promoting the study of Gothic Architecture, under the title "Remarks on the Principles of Gothic Architecture as applied to ordinary Parish Churches". It was succeeded by "Architectire of Tewksbury Abbey Church". Royal svo 1846. " Architectural notes in the neighbourhood of Cheltenham"and "Remarks on Wimborne Minster", 1847. "Remarks on Southwell Minster". With numerous good illustrations. 1848. "Architectural Notices relating to Churches in Gloucestershire and Susse". 1849. "Architectural Notices of the Curious Church of Gillingham.Norfolk". And an "Account of Sherborne Minster". 1850. In 1852 Petit published an account of Brinkburn Priory". In 1854 appeared Petit''s principal work. "Architectural Studies in France", imperial SVO. It was beautifully illustrated with fine woodcuts and facsimiles of anastic drawings by the author and his companion, Professor Delamotte. It showed much learningand observation, and threw light upon the formation of Gothic in France, and on the differences between English and French Gothic. A new edition , revised by Edward Bell, FSA, with introduction, notes and index, appeared in 1890. The text remained unaltered but the illustrations were reduced in size, and a few added from Petit''s unused woodcuts. In 1864-65 he travelled in the East and executed some striking drawings. He died in Lichfield on 2 Dec 1868, from a cold caught while sketching and was buried in St Micheal''s Churchyard. Petit was the founder of the British Archealogical Institute at Cambridge in 1844. He was also FSA, an honoury member of the Institute of British Architects, and a governor of Christ''s hospital.