travellers at knisuvik and sulphur mountains beyond , iceland 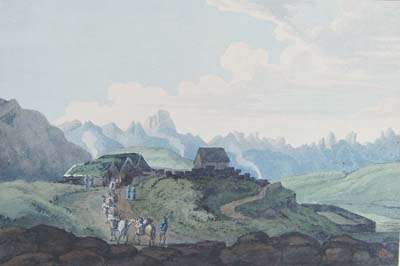 "It is quite beyond our power to offer such a description of this extraordinary place, as to convey adequate ideas of its wonders or its terrors. The sensations of a person, even of firm nerves, standing on a support which feebly sustains him, over an abyss, where, literally, fire and brimstone are in dreadful and incessant action, - having before his eyes tremen dous proofs of what is going on beneath him, - enveloped in thick vapours. - and his ears stunned with thundering noises must be experienced before they can be understood."