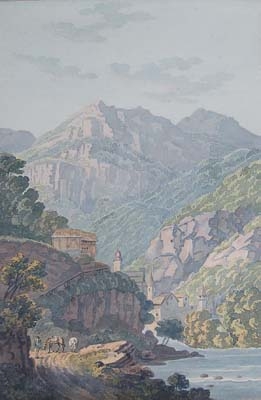 Thusis lies at the northern entrance to the Via Mala gorge. The community is bordered on the west by the Heinzenberg and east to the Hinterrhein and the right adjacent Domleschg. Despite its functional center for the communities of Mount Heinz Thusis remained until the 19th Century, a small village with nearly 700 residents (1850 769 inhabitants). Between 1850 and 1888 the population grew significantly in 1281 persons (1850-1888: +67%). Then there was a decades-long stagnation (1888-1930). From 1930 until the year 2000, the population increased markedly. First, Italians and Spaniards came, then the Tamils from Sri Lanka after 1985, and immigrants from Portugal and the republics of former Yugoslavia. Thusis has always been a German-speaking community.
Thusis''s center function for the whole valley including Heinzenberg and Domleschg and other basins, such as Schams and Albula, too. Trade and industry are the main pillars of prosperity in the community. However, the agriculture is still of great importance for the preservation and maintenance of the landscape. For several years, thanks to his wins Thusis scenically attractive surroundings (such as the Domleschg, the Heinzenberg, with its extensive mountain meadows and peasant farms, the Piz Beverin, the Hohenr?tien and numerous world-class attractions in the immediate vicinity (eg the Via Mala Gorge, the ceiling paintings the St.Martins Church in Zillis, the Carolingian church Mistail to the World Heritage list of Albula line of the Rhaetian Railway, whose starting point is Thusis, as well as the historic Trail Via Spluga from Thusis on Spl?genpass after Chiavenna (Italy)) is becoming increasingly important tourist.
Unlike the above-mentioned regions or Davos Lenzerheide, there is the problem with the second housing consequences of the soaring land prices and rent are not prohibitive, property prices have been stable or even decrease slightly. Given the numerous summer and winter sports, hiking, water sports in the forest pool, ski and cross country skiing to most fun sports like river rafting, Cannoning, paragliding from Piz Beverin and snowboarding in the immediate neighborhood may be exercised, would give the tourism Thusis a welcome additional economic foothold
Thusis was first mentioned in 1156 and owes both its origins and its later development to the transit traffic to the San Bernardino Pass and Spl?genpass. The founding Thusis'' is related to construction and security of the bridge together with the development thrust of the relocation of the street to the left through the Rhine and the expansion of the passage through the Via Mala gorge from 1473, to meet the competition of other Alpine passes remedy, since before the barrier the canyon of traffic jams. The importance can be measured, that the money for re-expansion after the great fire of 1845 up from Zurich, Lindau, Ravensburg, Hamburg, Milan and Venice came. Als dann 1882 die Gotthardbahn ihren Betrieb aufnahm, verlor der Thusner Transitverkehr mit Karren und Pferden schnell seine Bedeutung. When 1882 The Gotthard Railway started its operations, lost the Thusner transit with carts and horses quickly its significance. Through the world wars and financial crises, it took until 1 Dezember 1967, December 1967, to the San Bernardino tunnel as the first alpine national road tunnel in Switzerland was opened. The resulting boom went to the opening of the Gotthard road tunnel, turn back a little, but to this day.