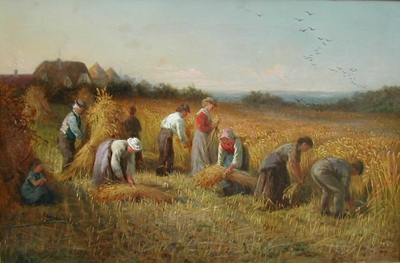 signed
At the end of the l9th century much of the corn was cut by hand using the scythe, and then gathered into sheaves by the sickle. The farmer and workforce, after first cutting around the borders of the land, then worked in rows, and men and women who followed the men with scythes made the corn into sheaves. They first made a binder with a handful of straw and then bound what they had gathered with sickles. These were then stacked and left to dry, and later some of the wheat harvested in this way would be threshed with the primitive flail.
The barn floor would first be well swept, and the sheaves opened and spread out in layers. With great dexterity, on the part of the threshers, the flail soon came into action, swinging in all directions, and never missing its aim. The barns were built with wide doors on each side, opposite each other and a wood floor was laid between the doors for use in threshing the corn. The doors were open and the wind passed through carrying out the "doust." It was arm-aching work, but very little corn remained on the stalks. The reed was gathered into large bundles and the corn and chaff swept into a heap with a besom broom. This exercise went on all day until the stacks were all threshed.
The winnowing machine was placed in the middle of the barn, the doors of which were thrown wide open to create a draught. Then we took over the handle and the mixture of corn and chaff was thrown into the machine. Soon the chaff, locally termed "doust " was flying into the farmyard and the golden corn was passing into a bucket set at the side, later to be sacked and sent either to the miller or corn merchant.
The reaping and harvesting of the wheat is attended with so heavy expense, and with practises of so disorderly a nature, as to call for the strongest mark of disapprobation, and their immediate discontinuance, or at least a modification of their pastime after the labours of the day. The wheat being ready to cut down, and amounting from 10 to 20 acres, notice is given in the neighbourhood, that a reaping is to be performed on a particular day, when as the farmer may be more or less liked in the village, on the morning of the day appointed, a gang consisting of an indefinite number of men and women, assemble at the field, and the reaping commences after breakfast, which is seldom over till between eight and nine o''clock. This company is open for additional hands to drop in at any time before the twelfth hour, to partake of the frolic of the day. By eleven or twelve o''clock the ale or cider has so much warmed and elevated their spirits, that their noisy jokes and ribaldry are heard to a considerable distance, and often serve to draw auxiliary force within the accustomed time.