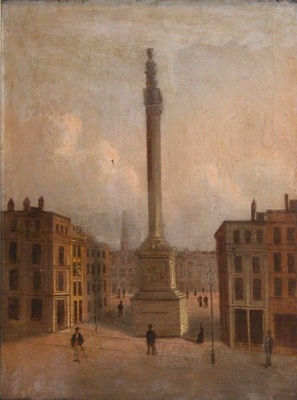 The Monument to the Fire of London, more commonly known as The Monument, is a 61-metre (202-foot) tall stone Roman doric column in the City of London, near to the northern end of London Bridge. It is located at the junction of Monument Street and Fish Street Hill, 61 metres from where the Great Fire of London started in 1666. It is the tallest isolated free standing column in the World.

It consists of a large fluted Doric column built of Portland stone topped with a gilded urn of fire, and was designed by Christopher Wren and Robert Hooke. The west side of the base of the Monument displays an emblematical sculpture, by Caius Gabriel Cibber, in alto and bas relief, of the destruction of the City; with King Charles II, and his brother, James, the Duke of York (later James II) surrounded by Liberty, Architecture, and Science, giving directions for its restoration. Its 61-metre height marks the monument''s distance to the site of Thomas Farynor, the king''s baker''s shop in Pudding Lane, where the fire began. At the time of construction (between 1671 and 1677) it was the tallest freestanding stone column in the world.It is possible to reach the top of the monument by climbing up the narrow winding staircase of 311 steps. A cage (see picture) was added in the mid-19th century at the top of the Monument to prevent people jumping off, after six people had committed suicide between 1788 and 1842.Three sides of the base of the monument carry inscriptions in Latin. The one on the south side describes actions taken by Charles II following the fire. The one on the east describes how the monument was started and brought to perfection, and under which mayors. The one on the north describes how the fire started, how much damage it caused, and how the fire was extinguished. In 1681 the words "but Popish frenzy, which wrought such horrors, is not yet quenched" were added to the end of the inscription. (The west side is described above.) The inscription on the east generally blames Roman Catholics for the fire, and this prompted Alexander Pope to say, of the area that it is where,Where London?s column, pointing at the skies,
Like a tall bully, lifts the head and lies." -- Moral Essays. Epistle iii. Line 339 (1733-1734).
The words were chiselled out in 1831.Wren and Hooke built the Monument to double as a scientific instrument. It has a central shaft meant for use as a zenith telescope and for use in gravity and pendulum experiments that connects to an underground laboratory for observers to work (accessible from the present-day ticket booth). A hinged lid in the urn covers the opening to the shaft. The steps in the shaft of the tower are all apparently exactly 6 inches high, allowing them to be used for accurate barometric pressure studies. Monument tube station is named after the monument.Another monument, the Golden Boy of Pye Corner marks the point near Smithfield where the fire stopped.