Antique The Madonna and Child 1 | ANTIQUES.CO.UK |

the madonna and child 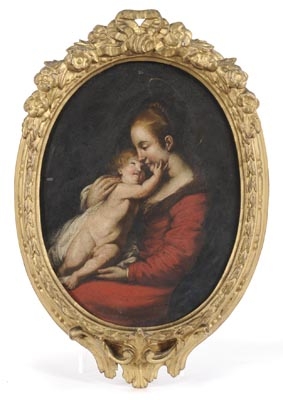 The work is contained within an 18th century
in a carved giltwood frame, decorated with flowers and swags
Strozzi was born in Genoa. He was probably not related to the other Strozzi family. In 1598, at the age of 17, he joined a Capuchin monastery, a reform branch of the Franciscan order. When his father died c1608, he left the order to care for his mother, earning their living with his paintings, which were often influenced by Franciscan teachings, for example his Adoration of the Shepherds (c. 1615) . In 1625, he was charged with illegally practicing as a painter. When his mother died c1630, Bernardo was pressured in court by the Capuchin''s to re-enter the order. He was briefly imprisoned in Genoa , and upon release fled to Venice to avoid confinement in a monastery in 1631. He became nicknamed all his life as il prete Genovese (the Genoa priest).

Saint Christopher, by Strozzi.Early paintings, such as The Ecstasy of St Francis show the dark emotionalism of Caravaggio. But by the second decade of the 17th century, while working in Venice, Strozzi had synthesized a personal style which fused painterly influences of the North (including Rubens and Veronese) with a monumental realistic starkness. For example, in the painting The Incredulity of Thomas, the background is muted, yet Jesus'' face, haloed and his outline, misty, in a style atypical of Caravaggio. Never as dark as the Caravaggisti, Venice infused his painting with a gentler edge, a style more acceptable to the local patronage, and one derived from his precursors in Venice, Jan Lys (died 1629) and Domenico Fetti (died 1626), who had also fused the influence of Caravaggio into Venetian art. Examples of this style can be found in his Parable of the Wedding Guests (1630),Christ giving keys of Heaven to Saint Peter (1630), Saint Lawrence distributing Alms at San Nicol? da Tolentino and a Personification of Fame (1635-6). He was also likely influenced by Velazquez (who visited Genoa in 1629-30). After a commission to paint Claudio Monteverdi his fame grew, and his portrait paintings included many of the leading Venetians. His pupils and painter strongly influenced by him included Giovanni Andrea de Ferrari (1598-1669), Giovanni Bernardo Carbone, Valerio Castello and, Giovanni Benedetto Castiglione.