the grand canal and the church of santi giovanni e paolo, venice 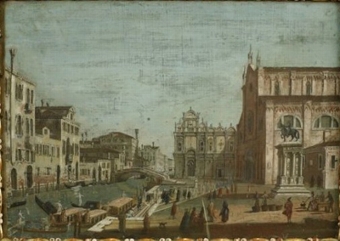 During the thirteenth century, the Dominicans established their order in Venice, and in 1230, they received land on which to build their church. They soon needed a larger building, and by the early fourteenth century, they began construction of a new church. By 1368, the apse and apsidial chapels were completed, followed by the nave in 1430. This grand Gothic church soon became popular as a burial place for doges, and it now contains 25 ducal tombs. Important burial monuments continued to be erected in the church until the fall of the Republic.