the gardens and park at fulham palace, london 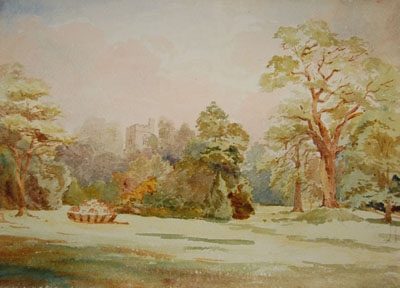 inscribed on the reverse " Palace Fulham"
Fulham Palace in Fulham, London (formerly in Middlesex), England, at one time the main residence of the Bishop of London, is of medieval origin. It was the country home of the Bishops of London from at least 11th century until 1975, when it was vacated. It is still owned by the Church of England, although managed by the London Borough of Hammersmith and Fulham and the Fulham Palace Trust. It is adjacent to Bishop''s Park, houses a museum of the palace''s history, and has an extensive botanical garden.
During the extensive restorations from 2001?06, excavations on the grounds of Fulham Palace have revealed the remains of several former large scale buildings and even evidence of Neolithic and Roman settlements. The second phase of works will be subject to the success of a future bid to the Heritage Lottery Fund. Habitation on the land on which the Palace stands can be traced back to as early as 700 AD, when ownership passed to Waldhere, Bishop of London. The estate was owned by the Bishops of London for over 1300 years and the Palace was their country home from at least the 11th century, and their main residence from the 18th century until 1975.
The Palace is now managed jointly by the London Borough of Hammersmith and Fulham and the Fulham Palace Trust, though it is still owned by the Church of England. Part of the Palace grounds was converted into allotments during World War II. They have remained in use since then allowing local people to grow their own vegetables, fruit and flowers. Although the Palace has its own chapel, the gardens adjoin the churchyard of the neighbouring parish church, All Saints Church, Fulham, where several former bishops are buried.
n the earlier 17th century, the gardens at Fulham Palace suffered from some unsympathetic attentions. The antiquary John Aubrey records among his memoranda, "the Bishop of London did cutte-down a noble Clowd of trees at Fulham", occasioning the sharp remark from Sir Francis Bacon, a dedicated gardener, "that he was a good Expounder of dark places."
Henry Compton was ordained Bishop of London in 1675; he imported several new plant species to the gardens at Fulham Palace and first cultivated some flora found in Britain today, including the American magnolia, M. virginiana, Liriodendron, Liquidambar and the first American azalea grown in England, Rhododendron viscosum. and in his heated "stoves" he grew the first coffee tree in England. The red horse chestnut, a hybrid of Aesculus hippocastanum and the American Aesculus pavia, was still noted in Fulham Palace gardens as late as 1751. In spite of the depredations of Henry Compton''s successor, some of the trees in and around Fulham Palace remain from this time, and visitors can still see the herb garden and wisteria which survive in the Palace''s walled gardens.
By 1681 the gardens at Fulham Palace were already remarkable, as John Evelyn noted when he visited them. Bishop Compton''s gardener in the early years was George London, who started his famous nursery at Brompton the year of Evelyn''s visit. By 1686 William Penn''s gardener was hoping to exchange the exotic flora of Pennsylvania for seedlings and slips of trees and shrubs and seeds from Fulham Palace gardens. His staunch defense of his former pupils the Princesses Mary and Anne, led to his appointment as Deputy Superintendent of the Royal Gardens to William and Mary, and a Commissioner for Trade and Plantations. In the colonies, he had a botanical correspondent in John Bannister, who was sent first to the West Indies and then to Virginia, and who, before his untimely death, sent Bishop Compton drawings, seeds, and herbarium specimens from which the Bishop''s close friend John Ray compiled the first published account of North American flora, in his Historia Plantarum (1688). The grounds originally covered more than 30 acres (120,000 m2), though only 12 acres (49,000 m2) remain the property of the Palace. The Palace also boasts the longest moat in England.