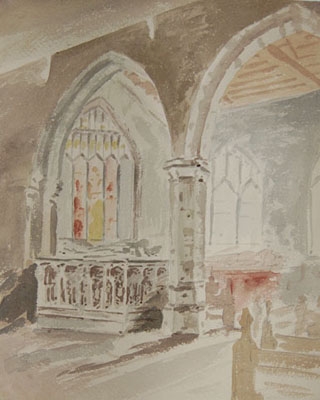 This tomb, ranked one of the best of the period, escaped serious mutilation over the centuries and has been compared in artistic excellence with those of Queen Philippa in Westminster Abbey and of Henry IV and his Queen in Canterbury Cathedral. The only difference is the lack of elaborate canopy heads. The date of the tomb can be calculated from the detail of the carving and the costume of the statues.
The tomb is traditionally assigned to Sir Thomas Arderne (died 1391) and his wife, Matilda, who was daughter and heiress of Sir Richard Stafford of Pipe and Clifton Campville. The co-joined hands, said to indicate marriage to an heiress, strengthens the belief that this is Sir Thomas'' tomb. However, the appearance of collars of ''SS'' on both effigies (Latin: ''Esse essentia'' - to be of importance), not introduced until the reign of Henry IV (1399-1413) would seem to date the monument to the 15th century. Extensive research has concluded that the effigy was commisioned by Sir Thomas'' son in memory of his parents, hence the later style.
Sir Thomas, who fought alongside the Black Prince at Crecy and Poitiers, is shown wearing a fine suit of armour. His head rests on a tilting helmet; the crest, a plume of feathers, issuing from a coronet, is encased in a conical bassinet (a light weight inner steel helmet with visor) encircled with an enriched orle (heraldic border around a shield). On the frontal bassinet are the words ''Jesu +Maria''. The neck and shoulders are covered by the ponderous camail, over which appear a collar of ''SS'' and small jewels. The body is protected to the hips by an escalloped jupon (padded vest) over a breast plate or ''plastron de fer'' and girded or filleted at the waist by a narrow band. The shoulders and arms are protected by epaulieres, brassarts and condieres (elbow pieces) and the left hand which holds the sword by a cuffed gauntlet, all of plate. The gauntlet of the right hand with the finger nails marked upon it and gadlings or raised bosses as a protection to the knuckles, is laid beneath the richly ornamented scabbard. The thighs and legs are encased in cuissarts and jambarts, the feet in jointed sollerets and the knees in genouillieres. Rowel spurs are attached to the heels by enriched straps and round buckles.
The earliest known church at Elford was Norman, probably 12th century. Until the restoration of 1848 there survived a Norman arch ''extremely plain and massive'' in a wall dividing the Nave from the South Aisle. A small doorway in the north wall of the Nave also survived until it was bricked up, probably in the 18th century, and replaced with a plain ugly window. In the second half of the 14th century the church was restored and altered to the style of the period by Sir Thomas Arderne, Lord of Elford at that time. A century later Sir John Stanley added the South Aisle and Chantry dedicated to the Blessed Virgin Mary. The ancient roses and portcullises surmounted by crowns in a window of the South Aisle signify the connection between the Stanleys and Henry VII, who is said to have met secretly with Lord Stanley at Elford on the night before the battle of Bosworth and persuaded Stanley to desert Richard III and join his side.
The old Norman tower was replaced by the present one in 1598. The date can be seen on the exterior. The church avoided destruction during the Civil War due to the efforts of the then Rector, Thomas Dowley, who although a Puritan managed to preserve the church from desecration.
The present church is largely the work of Francis Paget (Rector 1835-1882). An early follower of the Oxford Movement, he was determined to restore the church as nearly as possible to that of Sir Thomas Arderne in the 14th century. He did this over a period of years with the help of the Hon. Mary Howard, lady of the Manor. The interior of the church is full of interest with a multitude of memorials, lots of medieval detail and of course the wonderful monumental effigies. These monumental effigies are among the finest in the country. The oldest is that of Sir Thomas Arderne, the 14th century church builder and his wife, Matilda. The effigies of Thomas and Matilda are unusual in that they are holding hands.