the adoration of the shepherds 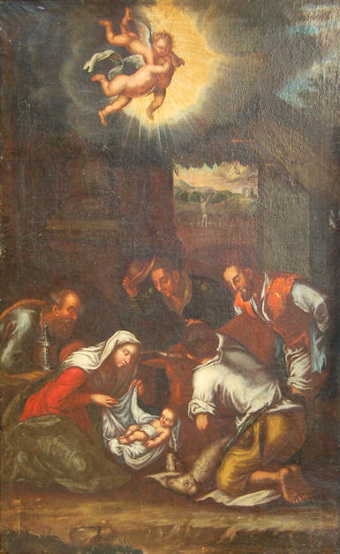 Jacopo Bassano (1510?1592), known also as Jacopo dal Ponte, was born around 1510 in the town of Bassano del Grappa, located about 65 km from the city of Venice. His father, Francesco il Vecchio, was a locally successful painter that had established a family workshop which primarily produced religious works in the local style. During his early youth Bassano was an apprentice in his father''s workshop. He eventually made his way to Venice in the 1530s, during which he studied under Bonifazio de Pitati (also known as Bonifazio Veronese) and was exposed to such famous artists as Titian and il Pordenone. After his father''s death in 1539 he returned to Bassano del Grappa and permanently set up residence there, even taking a local woman (Elisabetta Merzari) as his wife in 1546. He took over the management of his family workshop, which would eventually come to include his four sons, Francesco the Younger, Leandro, Giovanni Battista, and Gerolamo. After his death in 1592, his sons continued to produce numerous works in his style, making it difficult for later art historians to establish which pieces were created by Jacopo himself and which works were created at the hands of his progeny.

What makes Jacopo Bassano particularly unique amongst his fellow Renaissance artists was his ability to incorporate diverse artistic influences (including D?rer, Parmigianino, Tintoretto, and Raphael, amongst many others) into his work despite his reluctance to leave the comfort of his home town. This is attributed to his exposure to prints by these artists, of which he was most likely an avid collector.The Adoration of the shepherds, in the Nativity of Jesus in art, is a scene in which shepherds are near witnesses to the birth of Jesus in Bethlehem. It is often combined with the Adoration of the Magi, in which case it is typically just referred to by the latter title. The Annunciation to the Shepherds, when they are summoned by an angel to the scene, is a distinct subject. The adoration of the shepherds is based on the account in the Luke 2, not reported by any other Canonical Gospel, which states that an angel appeared to a group of shepherds, saying that Christ had been born in Bethlehem, followed by a crowd of angels saying Glory to God in the highest, peace on earth to men of good will. ThisAnnunciation to the shepherds forms a distinct subject in Christian art and is sometimes included in a Nativity scene as a peripheral feature (even though it occurs prior to the adoration itself), as in the 1485 scene by Domenico Ghirlandaio, where it can be seen in the upper left corner. Ghirlandaio also shows a procession of Magi about to arrive with their gifts. The shepherds are then described as hurrying to Bethlehem to visit Jesus, and making widely known what they had been told concerning him, before they finally return to their flocks. They praise God for "all the things that they had heard and seen, as it was told them," (Luke 2:20).Robert Gundry notes that the statement "appeals to eyewitness testimony combined with heavenly revelation." The scene of the shepherds visiting Bethlehem ? the actual adoration of the shepherds ? is very often combined with the Adoration of the Magi in a single Nativity scene.The scene is very commonly combined with the Adoration of the Magi, which makes for a balanced composition, as the two groups often occupy opposite sides of the image space around the central figures, and fitted with the theological interpretation of the episode, where the two groups, Jewish and gentile, represented the peoples of the world between them. This combination is first found in the 6th century Monza ampullae made in Byzantine Palaestina Prima. In Renaissance art, drawing on classical stories of Orpheus, the shepherds are sometimes depicted with musical instruments.[3] A charming but atypical miniature in the La Flora Hours in Naples shows the shepherds playing to the Infant Jesus, as a delighted Virgin Mary stands to one side.