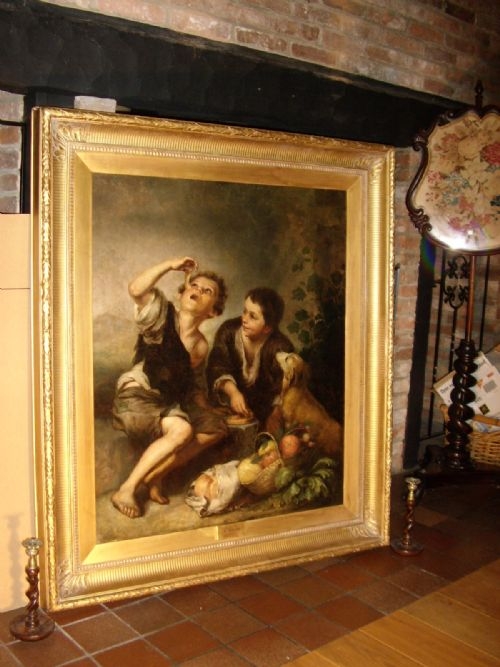 A fine oil painting titled "The Pie Eaters" after the original work of art painted back in the mid 17th century by the reknown and talented Spanish artist Bartolomé Esteban Murillo.

A well painted correct full scale version from the early 19th century (1800-1810)and finished with the same style of brush stroke and realism seen in the original work,very much like an old master.This fine version being painted with a warmth and charm achieved in the original example,currently housed in the Cadiz museum in Spain. CONDITION
The condition of the canvas is good,having been relined many years ago,and still holding firm,with no further attention being required.The painted surfaces have some signs of being carefully retouched and lighly revarnished as part of a recent full professional restoration program, although this is difficult to see,as the style and texture of this fine painting has a consistant flow. Great warmth and charm is felt when in the presence of this amazing painting,which under subtle lighting has a depth and realism flowing from the charactors,being two young hungry boys eating a pie under the nose of their obedient dog.FRAME
An original plaster and gilt swept frame in good solid condition,having just a few old repairs and still
looking great and vibrant with fine detail.ABOUT THE ARTIST
Bartolomé Esteban Murillo (born late December 1617, baptized January 1, 1618 – April 3, 1682) was a Spanish Baroque painter. Although he is best known for his religious works, Murillo also produced a considerable number of paintings of contemporary women and children. These lively, realist portraits of flower girls, street urchins, and beggars constitute an extensive and appealing record of the everyday life of his times.LIFE
Murillo was born to Gaspar Estaban Murillo and Maria Perez. He may have been born in Seville or in Pilas, a smaller Andalusian town.[1] It is clear that he was baptized in Seville in 1618, the youngest son in a family of fourteen. His father was a barber and surgeon. His parents died when Murillo was still very young, and the artist was largely brought up by his aunt and uncle. Murillo married Beatriz Cabrera in 1645; their first child, named Maria, was born shortly after their marriage. The mother and daughter became the subjects of two of his paintings: The Virgin of the Rosary[2] and Madonna and Child.CAREER
Murillo began his art studies under Juan del Castillo in Seville. Murillo became familiar with Flemish painting; the great commercial importance of Seville at the time ensured that he was also subject to influences from other regions. His first works were influenced by Zurbarán, Jusepe de Ribera and Alonzo Cano, and he shared their strongly realist approach. In 1642, at the age of 26, he moved to Madrid, where he most likely became familiar with the work of Velázquez, and would have seen the work of Venetian and Flemish masters in the royal collections; the rich colors and softly modeled forms of his subsequent work suggest these influences.[2] He returned to Seville in 1645. In that year, he painted thirteen canvases for the monastery of St. Francisco el Grande in Seville which improved his reputation.
Again back in Sevill,he was one of the founders of the Academia de Bellas Artes (Academy of Art), sharing its direction, in 1660, with the architect Francisco Herrera the Younger. He died in Seville in 1682 at the age of 64.LEGACY
Murillo had many pupils and followers. The prolific imitation of his paintings ensured his reputation in Spain and fame throughout Europe, and prior to the 19th century his work was more widely known than that of any other Spanish artist.MEASUREMENTS ( Including Frame)
Height: 53 Inches
Width: 46 Inches
Depth: 4 InchesTELEPHONE ENQUIRIES: 01530 411126 07765 856171
HOURS 10 AM - 10 PM 7 DAYS A WEEKDELIVERY UK MAINLAND & WORLDWIDE
QUOTES AVAILABLE ON REQUESTOUR REF: 0451 * A REMARKABLE PAINTING