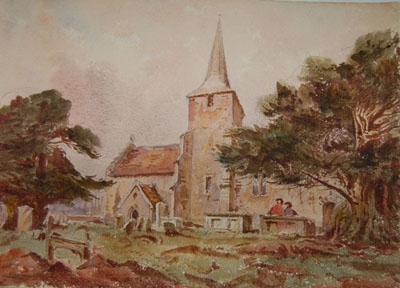 inscribed on the reverse " Cudham March 10 - 1868 "
Cudham is a village in the London Borough of Bromley in London, UK. It is located 15.5 miles (24.9 km) south-southeast of Charing Cross and about 6 miles (9.7 km) northwest of Sevenoaks. Cudham church, dedicated to St Peter & St Paul, is mentioned in the Domesday Book. The Blacksmith''s Arms, originally a 17th century farmhouse, has memorabilia of the music hall artiste known as Little Tich. Cudham was part of Bromley Rural District from 1894 and Orpington Urban District from 1934 to 1965. St. Peter and St. Paul with original parish registers going back to 1653. The village pub is the Blacksmith''s Arms, which is also the birthplace of Cudham''s most famous son, Harry Relph (1867-1928) who was a star of the music halls under the name of Little Tich. He starred in London and New York, and often travelled to Paris to appear at the Alhambra, the Olympia and the Folies Bergere.