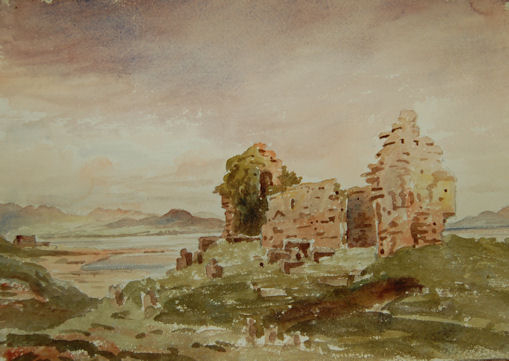 St Duthac?s in Tain was an important medieval pilgrimage site. This picture shows the remains of two of three surviving medieval churches dedicated to St Duthac (or Duthus). The roofed church was built in the 14th century and converted by James III in 1487 to a collegiate church. As such it housed a group of clergy dedicated to the cult of St Duthac, containing the shrine and relics of the saint. Neaby is the unroofed and now ruinous old parish church, built at the end of the 14th/beginning of the 15th centuries. Down on the links to the northeast of Tain lie the ruins of St Duthac?s chapel, probably the oldest of the three, dating to the 13th century.

Tain was a popular pilgrimage site, favoured by local and nobility alike. It reached its height of popularity in the reign of James IV (1488-1513), who visited almost annually after his first visit in 1493. Clearly there was piety involved, but some historians have also pointed out that it was convenient when visiting his favourite mistress at Darnoway Castle in Moray. This patronage resulted in a flow of money and gifts to the shrine.Given how popular the cult was, it is somewhat surprising how little we know about St Duthac himself. The connection with Tain seems to be simply that a cleric of that name was born and buried there. Few details of his life can be verified. Tain was able to capitalise on the cult by its possession of a number of relics, including his bones, shirt and bell. All of these disappeared after the Reformation.The Reformation also marked the decline of the buildings, as only one church was now needed. The church on the links probably soon became ruinous. The collegiate church became the parish church, until 1815, when it then decayed and was later restored, though no longer functioning as the parish church. The old parish church, pictured here, lived on as a burial mausoleum. It is now unroofed and ruinous.ARCH will be leading guided walks in Dornoch (Saturday, 12th February),Tain (Sunday, 13th February) and Camore near Dornoch (Monday, 14th February), highlighting some of the rich heritage along the coast, including these churches. Further details and booking from the Events section of the website.John Louis Petit was born at Ashton-under-Lyne, Lancashire, son of John Hayes Petit. He was educated at Eton, and contributed to the "Etonian". He was elected to a scholarship at Trinity College Cambridge in 1822, graduated BA in 1823 and MA in 1826, and on 21st June 1850 he was admitted "ad eundem" at Oxford. He took holy orders in 1824, but undertook no parochial work. Petit showed a taste for sketching in early years. His favourite subject was old churches, and a great part of his life was spent in visiting and sketching them. In 1839 he made his first extensive tour of the continent. The results appeared in his "Remarks on Church Architectire" (1841, 2 vols which had illustratuions. It was followed in 1846 by "Remarks on Church Architectural Character" Royal folio format.In the same year Petit published a lecture which he had delivered on 24th Feb 1846 to the Oxford Society for promoting the study of Gothic Architecture, under the title "Remarks on the Principles of Gothic Architecture as applied to ordinary Parish Churches". It was succeeded by "Architectire of Tewksbury Abbey Church". Royal svo 1846. " Architectural notes in the neighbourhood of Cheltenham"and "Remarks on Wimborne Minster", 1847. "Remarks on Southwell Minster". With numerous good illustrations. 1848. "Architectural Notices relating to Churches in Gloucestershire and Susse". 1849. "Architectural Notices of the Curious Church of Gillingham.Norfolk". And an "Account of Sherborne Minster". 1850. In 1852 Petit published an account of Brinkburn Priory". In 1854 appeared Petit''s principal work. "Architectural Studies in France", imperial SVO. It was beautifully illustrated with fine woodcuts and facsimiles of anastic drawings by the author and his companion, Professor Delamotte. It showed much learningand observation, and threw light upon the formation of Gothic in France, and on the differences between English and French Gothic. A new edition , revised by Edward Bell, FSA, with introduction, notes and index, appeared in 1890. The text remained unaltered but the illustrations were reduced in size, and a few added from Petit''s unused woodcuts. In 1864-65 he travelled in the East and executed some striking drawings. He died in Lichfield on 2 Dec 1868, from a cold caught while sketching and was buried in St Micheal''s Churchyard. Petit was the founder of the British Archealogical Institute at Cambridge in 1844. He was also FSA, an honoury member of the Institute of British Architects, and a governor of Christ''s hospital.